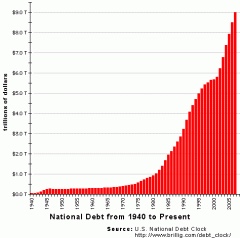 Sometime this summer the U.S. National Debt will hit $23 trillion dollars. For one day the newspaper headlines will reflect this tragedy...then America will yawn and forget about it.
The National Debt is comprised of two parts; what we owe bondholders and foreign governments and what we owe through interdepartmental borrowing. And both sets of debtors leaves America fraught with financial woes.
As current bondholders begin to perceive that the money they are owed will be paid back in inflated dollars they will stop buying bonds and put their money in gold. Same for our foreign investors; largely China, Japan, South Korea and Middle East oil barons. That will of course make bonds harder to sell and the feds will be forced to increase the yield on their bonds...which also raises the interest rates the government must pay to borrow....which, in a vicious cycle, will only increase the national debt.
Bond investors and foreign entities makes up about two thirds of our national debt. The other third is comprised of what the government calls "Interdepartmental loans". Those are like IOU's issued to various financial trust funds, the largest being the Social Security Trust Fund....the piggy bank the government has been raiding since 1965 to pay for overly generous government welfare programs.
Since 2005, beginning with George Bush, and flourishing under Barack Obama, the national debt has climbed from $5 trillion, then rising annually to the current $23 trillion. In last year's budget we ran up a trillion dollars more, which is why we'll officially hit that $23 trillion dollar mark sometime before Labor Day.
Were we to develop a backbone, and not ring up a penny more in the national debt we'd still be in deep trouble. Here's why:
The Congressional Budget Office (CBO) projects that interest payments will continue to grow rapidly, rising from $389 billion in fiscal year 2019 (the current fiscal year) to $914 billion in 2028. Overall, net interest costs will total nearly $7 trillion over the next decade.
I want you to read that last part very carefully. We are looking at paying out $914 billion dollars per year just in interest on the national debt within the next eight years. (It could come even sooner if anyone of our foreign debtors call in their loans).
Put those numbers in perspective, people. The U.S. government only takes in about $2.3 trillion in taxes and fees. Where does the money come from for all the government goodies when the federal government begins to pay nearly half of all revenue just to service the national debt?
And what will those "47 percenters" do when the welfare checks dry up? And the food stamps? And when their free Medicaid goes away? What will Social Security pensioners do when Uncle Sam says "sorry...we don't have money to pay you your pensions?" Can you imagine the social chaos once the government is no longer able to furnish a nourishing tit to the nonproductive masses?
Alas, the only way any government has managed to erase their own debt is through a combination of reducing benefits and inflating their currency. Look to Greece, Italy and Spain recently to see how that turned out. If you wish to go back further just look at the fall of Imperial Rome after 500 hundred long years of world dominance. So what does inflation mean to you? It means your buying power is reduced and you live in extreme poverty. It means, as in the Carter years, you'll be paying 20 percent interest on your home mortgages. It means your savings will buy you a Big Mac combo and that's about it.
But surely our Congress knows all this...right? Yes, they do. And they are tromping all over the backs of your great grandchildren to maintain their big spending ways. Very few of them principled statesmen, they all hope to be dead by the time the chickens come home to roost. But it's likely you won't be, nor your children and grandchildren. It is the collective "you" who will witness America's final financial collapse...and "you" who will suffer from three decades of financial mismanagement.
But don't worry about it, huh? Just scroll on past this posting. It's too complicated to comprehend, and it's too depressing to even think about.
Instead, pursue the rainbows and unicorns while the pursuing is good.
Sigh.
Posted by A Modest Scribler at 3:00 AM

Superb article. It has been the profligate government spending that has put us in this situation, not a lack of revenue. Fact is, neither party cares at all. We are the car heading towards the cliff with no brakes. The politicians are simply sitting in the driver's seat, telling us not to worry. Medicare for all? Speeds up that car. Free college? Hit that accelerator. Guaranteed income? Drink while you drive. Government is, and always has been, a necessary evi!. Unfortunately, that evil will destroy the nation.

Thanks, Randy. So few understand all of this so it is "what, me worry ?" Those zeroes are just hard to fathom, even for me.