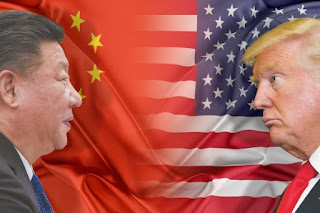 Well the Chinese trade negotiators went home empty handed today. The U.S. refused to grant additional time before imposing trade tariffs since the Chinese backtracked on previously agreed upon points, including technology theft enforcement and currency manipulation.
I wish I could be at the airport to see them off. I'd give em a Bronx cheer, then go over to Lafayette Square and cheer our President on. Good for him! After three decades of being raped and pillaged it's time for America to develop a backbone.
Effective at midnight this morning Trump one-upped Wall Street by slapping the full 25 percent tariffs on $200 billion of Chinese goods.
Of course the liberal mainstream media, and the big banks are running around, their hair electrified, screaming armageddon. Good on them!
Given my preferences I would have imposed tariffs on the other $300 billion of Chinese goods...something Trump has promised to do if the Chinese refuse to agree to a level playing field soon.
In fact, if I were 20 years younger, I would start up a small business....manufacturing plastic toilet brushes, school backpacks, number 2 pencils, towels and linens, or any number of other things. There has never been a better time to start a business and not have to compete with Chinese labor and lax environmental laws. Our President has already reduced U.S. corporate taxes to 20 percent and offered a very generous 5-year immediate tax credit write off for any company wishing to invest in capital equipment.
Somehow this President has been able to bring back a trillion or so in U.S. corporate money held overseas, once sheltered in foreign banks from Obama's oppressive 35 percent corporate tax rate. Further, President Trump has been able to double the Gross Domestic Product (GDP) growth since he took office. And did so without fanning even a whiff of inflation. This is even more remarkable when you consider that more people are working and drawing higher wages than at any time during Obama's reign of terror.
A cautionary note, though. If the unemployment rate of 3.7 percent (the lowest in five decades) gets any lower the Democrats are going to want to subpoena the entire work force of the Department of Labor and the Department of Commerce. And no doubt Elizabeth Warren will want to break up any business that is too profitable, and OAC will want to confiscate 97 percent of business profits, and Crazy Joe Biden will accuse that businessman of not building that business himself, and Nasty Pelosi will want to see your tax returns.
But, for now, a tip of the hat to a President that has the backbone to stand up and say no to the Chinese rape of America, without a single ounce of Astroglide to make the butt fuck less painful.
Keep it up, Mr. President!
Posted by A Modest Scribler at 3:00 AM

Kudos to President Trump! These are superior economic times..........for now!!

Absolutely, our president must not back down. No deal is much better than an America-raping-sovereignty-losing-globalist deal.

With the big tariff, not only can the average Americans once again start their own businesses, but the tariff money will also help with our debt issue.

Absolutely none of this will be accurately reported by the MSM. All I read is how Trump is "starting a trade war with America's biggest trading partner". This bias will carry over to the election as well. Wake up, America. The media is corrupt and lost. Will you give away what's left to the left?

MSM doesn't have to tell the truth. They don't care how many Viewers they have. Idiots like George Soros will keep them afloat, not Advertisers. Take all the big money away and watch how fast the tune changes. If I were Trump, Soros would be in my cross-hairs.

It is already exposed by multiple credible sources that the Chinese have bribed many influential figures both higher up and down under from all walks of life here. Trump played the card cunningly by going soft with them from the start, and let the Chinese do their normal tricks of delaying, blackmailing and bribing. Now they are exposed to the whole world as untrustworthy-lying-cheating scammers who would never play fairly, even the left cannot support the Chinese openly in this state.

A big victory well deserved this is. Kudos to Trump and his team. This will set an example for the rest of the world too see, every one in the game has to play fairly! If this keeps up for 4 more years, the states will become respected again, and the whole world will stand to benefit!

However, if 2020 is lost, and somehow one of those dems and rinos got into the office, America will be fucked by the enraged globalists like we have never seen before.