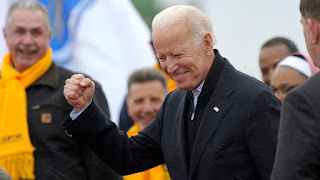 I could not help but think about those old comic routines yesterday as I listened to Joe Biden campaigning in Pennsylvania yesterday.  Joe, fashionably tie-less, swathed in the finest winter duds, every transplanted forehead hair in place, stepped up to the podium and proclaimed before a labor crowd "hello my friends, let me say something honestly and simply (we would certainly hope so)....and I mean this (again, we would hope you're not lying out your ass)...I'm a union man!"

Well that bit of poetic inspiration must have warmed the cockles of the hearts of all those Teamsters.  Joe went on to borrow from Barack Obama and proclaim that business did not build their businesses.....seems American business was built on the backs of $50 dollar an hour union men.  Seems that the AFl-CIO chief George Meany and the Teamster's Jimmy Hoffa invented the auto assembly line and America big rig.

Joe's speech was all so familiar.  And, really, what else can Joe offer?  Shall he stumble again over complimenting Barack Obama for being able to speak English, minus the Ebonics?  Shall he again note that America's 7-11's are owned by funny talking Indians?  Or should Joe bring up the only piece of national legislation he was responsible for.............the billion dollar federal subsidization of Amtrak, so he could ride it home from D.C. to his home in Delaware each night for less than the price of a cup of coffee.

Spend any few moments listening to Joe speak and you'll find it fascinating.  In any series of three sentences Joe will stumble over the most basic of English words.  (Yesterday he managed to turn some unexpressed "h-word" into "hedgehog".  But it's more than Joe's speech.  It's the substance that is Joe himself.  He is the most "uncool" trying to be "cool" of anyone I've ever known.  Aside from his serial groping of women, Joe can't seem to go an hour without saying or doing something stupid.  Never mind that Obama put lipstick on his VP, then sent him winging off to some third world funeral, to keep him out of the limelight, "Joltin' Joe" was bound to say something silly between Blair House and Air Force 2 sitting placidly, engines running, out on the flight line of Andrews Air Force Base.

Well the lipstick's been removed, and Joe has no Presidential handlers to keep him in check.  So you can expect Joe Biden to again stumble through still another failing campaign for President.  He's already lost miserably in two prior efforts and this campaign will be no exception.  Will his demise come from another shotgun blast at his Delaware estate?  Will he accidentally grope Babs Streisand's drooping old breasts?  Will he break down in tears once too often?  Or will the MeToo Women bury him with an Anita Hill-efficiency. 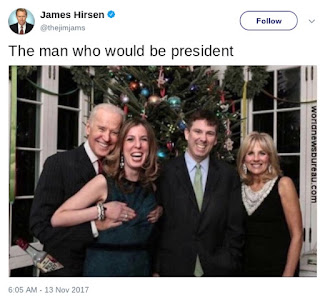 No one knows....but you can feel secure in knowing Joltin Joe will commit some form of political Hari Kari before this campaign his over.
Posted by A Modest Scribler at 3:00 AM

Biden's candidacy is both a tacit admission by the Democrats that maybe, just maybe, the voters won't support the cadre of lunatic fringe they really want to run, plus Biden's monstrous ego won't let him miss this final chance to grab the gold medal. He's a known quantity, nothing special about him. Speaks volumes to the unspoken desperation the Democrats are feeling behind closed doors.

Hmmmmm. And look who is supposedly running our country now. I'll take Joe any day!

Let me see. You talk about 'groping Joe' while an admitted sexual assaulter and 'lunatic' sits in the White House. That's rich! LOL!
Oh, BTW, how many lies has Trump told THIS week that you believe.

Randy, I heard a comment yesterday that noted, while the lunatic Left want something new and shiny, and a little bit freakish, two of their candidates are old White men and are leading in the polls. Deep down they know at least 20 of their candidates have no chance to win.

Hey anon, I offer no defense of Trump. He is what he is. But Joltin Joe goes around crying crocodile tears about the fate of today's woman. That's a bit dishonest since Joe has had more than his share of exploring women. Look how shived Anita Hill. Old Joe has a long history in the "good ol' boy" network and is only recently arrived on the scene as their champion. With Trump (and all his ills that i've written about frequently) you know the beast you're dealing with. The rest of the Democratic clowns are Johnnys Come Lately trying to elicit support for what they have not earned. By the way, I think your Anon tag is cowardly. Grow a pairs of gonads (or ovaries) and speak out openly about what you believe.