Staking Claim To One's Own Era 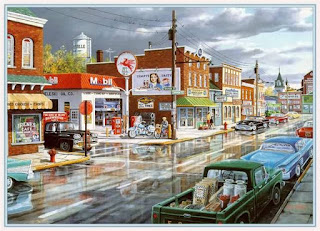 I was just reading the comments following an article on the death of Doris Day. Nearly the entire field of comment came from those who enjoyed Doris in those "Rom-Coms" from the 60's. Such thoughts as "she was one of film's last great actresses" was expressed often. Or "we will not see the likes of her again". Or "I miss those feel good movies, where sex was only hinted at on the screen, but were still sexy".
Those kinds of comments can be found just about anywhere where music or art defines one's own times. You see it on U-Tube all the time. "Gosh, that was when music was music...not the trash that pretends to be music nowadays." I've read similar sentiments a thousand times as I called up music videos from the 50's and 60's...the first flowering of my own era.
Though I often disparage about what's called music today, or about the dearth of what I consider "good movies", trying to gauge which generation was better is a tentative and treacherous effort. I readily admit that I'm as guilty, or more so, than most, as I find today's movies and music largely lacking in any degree of redeeming value. I suspect it really is the "old fogyness" in us all. But if that were wholly true why do I see 20 somethings saying things like "I'm only 20 years old but I love the music from back then". Prejudiced or not, I would tend to agree with that young person. If my era's music wasn't good enough for Gen Xers and Millennials why do we see so much of our 60's music serving as the background score for hundreds of movies and hundreds more television commercials. (Again, my prejudice is probably creeping in.....but where does one find today's version of music blasting out of the sound bar of your entertainment system?)
Whether each generation is weighed down by their own personal biases, and incapable of objectively determining the best movies, or the best music, that we are is beyond question. If today's music was that bad no one would be buying it. And if today's young-uns don't think our music was mighty fine, well, we boomers are not likely to lose sleep over it. Our parents would probably say their Big Band era was superior to anything that came after. And that may be true for them.
But I'm not ready to surrender the crown from my own era. Case in point. Just last night I was watching the Diamondbacks-Pirates game. When they came back from commercial the stadium was blaring some old rock and roll through those colossal loud speakers. And, as the camera panned across row after row of baseball fans, they all seemed to be on their feet, gyrating and swaying to an old tune that I still can't listen to without jumping to my feet and boogying to in wild abandon. The song being played?
https://www.youtube.com/watch?v=ZKG0SqhSJic
Posted by A Modest Scribler at 3:00 AM