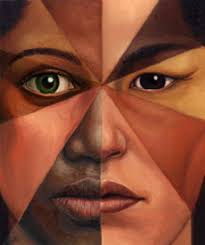 I've been noticing a rather dramatic shift in corporate advertising for more than two years now.  I have hesitated to raise the issue here, lest I be called a racist.  All I can say in that regard is that my own Caucasian-Asian marriage and the many mixed marriages all down my ancestral lineage say otherwise.

I have no problem with a natural evolution from dominant ethnic types to a veritable melting pot of ethnicities.  What I do have a problem with is how the corporate world, through their advertisers, are trying to accelerate the trend.

If any of you have been paying attention of late you'll see commercial models comprised of Black-White couple composition in far more frequent occasions than you see out in the real world.  If we are to believe Madison Avenue, half of America is made up of Oreo cookies.  Yes, there are still some slightly conservative corporate entities that show traditional ethnic centric commercial models but they are now becoming few and far between.

That corporate America hates Whites nearly as much as today's college snowflakes is beyond dispute.  Just look at your typical print ad or television commercial and you'll see Blacks or pretty olive-skinned faces, dusky from the weight of Hispanic, or Middle Eastern, or Asian cultures.  There is no longer any room for John Q. Smith, white as a ghost, in commercial advertising.

That's playing it safe, lest anyone (except Honkies) are offended in the eternal hawking of product or service.  Or perhaps it's because the corporate world is adhering to that old bi-sexual saw that says having a choice of two sexes doubles your chances of getting a date.  Perhaps there is some reason beyond what I can see that rings the registers more robustly when olive or dark skinned spokespeople are doing the hawking.

I can only conclude that the mongrelization of the races serves some monetary purpose, else we would not see the 15 percent of Hispanics and 12 percent of Blacks in the populace make up 60 or more percent of those who are portrayed in TV commercials.

And what shall we call the ever increasing frequency of gays out buying Lazy Boy recliners, or adopting a dog, or snuggling over a cup of Nestle's hot chocolate and Orville's popcorn?  Shall we call that "homo-genization?"  And given that gays make up only one or two percent of the population, what the hell is corporate America trying to tell us?

Thankfully we have come a long way since those days when Blacks appeared only on the boxes of pancake mixes and syrups, and Uncle Ben's Minute Rice.  Sadly, as is true with those sometimes glacial societal shifts, when the dust settles we've found we overshot our aim by a wide margin.  We are certainly doing that today, thanks to the sometimes subtle, or the sometimes "in-your-face" methodologies of Madison Avenue.

To me, it's comical as I notice the intense race to achieve the correct mix of ethnicity and sexual preferences in the attempt to entice consumers to purchase a product. Do producers really believe that aspect of advertising wil result in sales increases? It's painful to watch simply because it's so obviously contrived. The biracial couple picking out a mattress or the homosexual men buying shoes.... Please.

Whew! Glad to hear I'm not the only one that sees it this way.

I have noticed it when I go to a friends house and see the commercials on their TV. I have ask if they are watching BET and they say no, why? I tell them that every ad so far on TV had nothing but blacks in it. All the children and adults are black. They claim then never notice.

Yes, Wally. Their methods are almost subliminal.............seeking to brainwash you without your even knowing it.