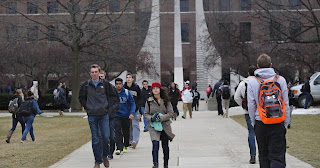 Surprisingly Purdue had this very same problem last year at this time.  The Purdue IT folks thought they had solved the problem, only to find the channel surfers had found a way around the ban and were, this year, back to their old tricks.

And here we all were worried about those snowflakes being indoctrinated.  Looks like the only indoctrination was coming from the streaming services. Apparently not all of the 84 percent were tuned in to Hulu and Netflix.  Some were shopping on Amazon or the Apple Store.

Looks like we now know why those campus street interviews are so silly.  You know...the ones where students are asked about the three branches of federal government, or the name of the guy filling the VP chair, or who was the first President, or which sides fought the Civil War.

Makes you wonder why those rich folks had to spend so much money getting their kids into college.  The kids could have just stayed home and achieved the same academic results.