Out of Sight, Out of Mind....Until Your Taxes Come Due 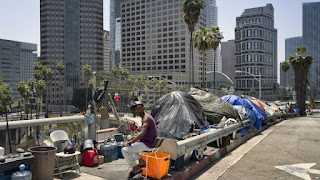 Last fall California passed legislation authorizing a $2 billion dollar bond loan to build housing for that state's homeless, most of them illegal immigrants.  Alas, that is proving not enough.  Even as California dusts off the welcome mat for more Mexicans, Hondurans and Guatamalans the newly elected Governor, Gavin Newsom. has issued dictates to California cities, forcing them to build more Section 8 housing, or face having all state funding withdrawn from those municipalities.

Our Socialist Sacramento solons seem not to have learned from their two decades of socialist governing.  Like bees to honey, California's generous social safety net programs are drawing more and more folks to the golden state.  It is now possible for illegals to get a driver's license, and with simply a postal mailbox, sign up for state benefits.  Unfortunately, millions are doing just that; chalking up $2 or $3 or $4 thousand dollars in benefits, while living in a tent on the street, or even sleeping on the sidewalks on discarded mattresses.  And the sidewalk dwellers either send that government money home to their families, or spend it on drugs and alcohol, then flood the homeless shelters and soup kitchen for shelter and sustenance.

According to the Los Angeles Times, California now owns 30 percent of America's homeless population.  And with those numbers the state leads all other states in outbreaks of diseases that were once eradicated from the American populace.  The latest health issue involves outbreaks of typhus, but even the once rare diseases are making a comeback; to include leprosy.

The biggest champions of illegal immigration are Silicon Valley billionaires and Hollywood elites, all ensconced in their gated communities.  And Sacramento Democrats who run the show, working hard trying to make a Socialist state work.  Out of sight, out of mind are the millions of human dregs, thriving on the lotus blossoms of alcohol and drugs, or the forged paper crowds, and all those looking for an easy ride through life.

It's very telling, the attitude the leftists have adopted. The druggies, drunks, and bums (that's what they are, BTW) have simply been accepted as a normal part of society out here. All of the programs ostensibly designed to "get them off the streets" accomplish very little in terms of actual numbers of folks placed in long term care. My point is the way CA deals with the street people is a great indicator of the progressive minndset: Objective results do not matter. It's simply the intention that counts.

True, Randy. If results counted those programs would have died long ago. California is a magnet to people who are seeking an easy ride.