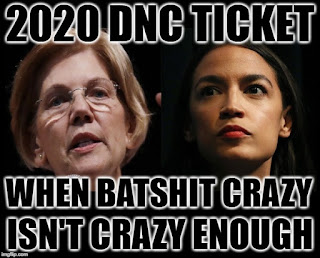 I came across a USA Today poll on Friday morning that left me a bit stunned.  Seems that the Democratic party is far more socialist oriented than even I expected.  For example, if we can believe the poll numbers, fully 87 percent of Democrats believe we need to raise taxes.   I guess the top three percent of earners paying 85 percent of all taxes aren't enough for the Dems.  I was also surprised, given the nightmare that Obamacare has proven to be, that 81 percent of Democrats polled support Medicare For All, with its $30 trillion dollar costs.  Hell, even free university education is supported by 74 percent of Democrats.  If that is nightmarish, consider that college tuition has risen by something like ten times the rate of inflation of everything else in our economy.  Can you imagine the federal government shelling out $10 trillion a year to fund the snowflake generation, then adding another ten percent each year to cover escalating tuition rates?

There was a hint of sanity in last week's poll.  Democrats largely said they would be willing to compromise their socialist principles if a "middle of the roader" socialist was needed to defeat Trump.  Dems say ousting Trump triumphs over everything else.  However, Dems did say any candidate who fails to champion The Green New Deal would be a non starter.  Apparently Dems haven't been reading the cost of TGND nor the negative impact it would have on the American economy.

Those polled said they are excited about Crazy Joe Biden entering the race.  They say they school Joe on Post Graduate Level Socialism since he left office as VP.  Some 30 percent were less inclined to accept Joe as candidate.  They say he's too old school.

I could not help but reflect on the liberal darlings of the 60's; John Kennedy and his brother Bobby.  Both would be considered ultra right wing in today's political environment.

Another interesting, and scary note for Democrats, was the poll's numbers on those who believe the Democrats are not left wing enough for them.  Fully 11 percent of those polled prefer a third party with a platform that will champion a total transformation of the U.S. to a pure Socialist state.

I have no idea who the Democrats will choose to oppose Trump next year.  But in light of these poll numbers it would seem essential that any left of center candidate who might win the nomination would almost be forced to choose a VP candidate further Left than old fat Mao.
Posted by A Modest Scribler at 3:00 AM

I sincerely hope the Dems choose the hardest left candidate they can, only because the referendum on what this nation will be can only occur with two polar opposite choices.

Randy, I am supremely curious about which road we'll take. We may be as socialist as some may thing we are. Pray not but I am continually shocked by he calls for more and more freebies.