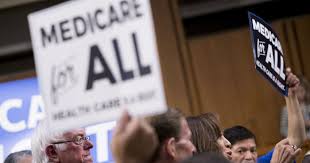 Okay, people! Time to give a nod to the Democratic controlled House of Representatives! They just introduced a Medicare For All bill this morning (Wednesday, 27 February) that grants free Medicare For All...no premiums to pay and the package includes free medical care, vision, dental and abortions.

The bill was co-sponsored by 100 Democrats who claim healthcare is a right....and should be free.

Though the Office of Management and Budget has not costed out the program, independent auditors say the bill will cost taxpayers $3.3 trillion dollars per year.

Of course the hang up here is that, for all of 2018 the government took in only $3.1 trillion in revenue. So if we were to fund Medicare for All there will be zero money left for defense, social security, education, welfare, food stamps, Section 8 housing, Homeland Security, Housing and Urban Development and a hundred other programs and departments funded by the federal government.

The Democrats say "no sweat". We can tax the rich. Except the OMB already ran the numbers on that. If we taxed every billionaire in the nation at 100 percent of his income it would cover only six months of current spending.......and certainly wouldn't cover an added $3.3 trillion to pay for Medicare For All.

"No Matter", say the Democrats, "the federal government has a credit card that makes the American Express Black Card look like peasant fodder." "Put it on our bill and add another $33 trillion to the current $22 trillion of national debt".

I still like the idea that no member of Congress receives a paycheck anytime the current budget shows a deficit.

Jeff, I like the idea that members of Congress go to jail for writing hot checks.

I have long said there is no constitutional grant of authority that provides the federal government with the power to establish and run a national mandatory health care system. The low brows cite to the preamble ( "provide for the general welfare") except that is not an enumerated power. Plus, if Congress has the power to tax anything they want, why did the government pass the 16th Amendment to tax income? Why did Congress not require states to expand Medicaid in the ACA if they already possess the power to do so? The concept of federalism still has limits. I have no doubt a Democrat Congress and a Democrat President will try to do this. I also firmly believe it violates state sovereignty and any honest court will strike down the attempt.

Randy, let's hope Ruthie gets replaced soon. Also, the far left has taken it upon themselves to pronounce all kinds of benefits as "rights". That's the only way they can sell it.