Why Student Loan Stupidity IS Your Business 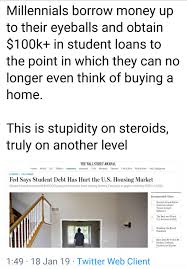 An 18 year old kid shows up on his college campus.  He's a little dazed, like a deer in the headlights.  At the student finance office he signs his name for $50,000 in student loans.  The check arrives and he pays his inflated tuition, buys his books, then heads out to Pot Common and rents an apartment.  Shelter assured, he goes out and buys a car, hits the beer bars on Friday nights and, through the week, orders pizza and hot wings in.

By the time the kid graduates he's run up $100,000 dollars of student debt.  If his degree is in Ethnic Studies And Associated White Guilt he'll find it hard to get a job.  If he has a marketable degree he'll spend the next ten years paying off his student loan.

Why should we care?  Because the current $1.8 trillion in student loan debt puts a damper on the larger economy.  The "unlucky stiffs" are likely candidates for food stamps and Section 8 housing and a welfare check.  The "lucky ones" are drowning in so much student loan debt they can't participate in the economy.  Their debt is such that they can't buy a new car, nor purchase a home.   Economists say that the $1.8 trillion in student loan debt probably lowers the Gross National Product by a full one percent.  It is an anchor around the neck of our economy and a siphon straw that strains the social safety net.

As silly as our society can be,  perhaps giving a financially ignorant 18 year old such power to ruin his life is the silliest.  And, in addition to ruining his own life, that free flow of student loan money has contributed to soaring tuition costs....no damper installed to keep tuition rates reasonable....making it almost impossible for the student trying to work his way through college without incurring massive debt.

Government bureaucrats are always the last to do anything about the problem.  Thankfully though, 12 states now require high school seniors be given a financial management class in their last year of high school.  Arizona is only now joining  those who are at least trying to enlighten those kids who have never even owned a credit card before college.  Our Senate Bill 1184 is working its way through the sausage-making and hopefully will require tutorship on the dangers of running up student loan debt.  Perhaps they can teach these kids that those student loan checks are not monopoly money and the banker is gonna be on their ass about ten minutes after they are handed their diploma.
Posted by A Modest Scribler at 3:00 AM