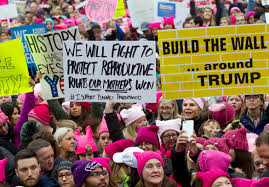 So the 3rd Annual Women's March has kicked off this morning.  I admit to understanding nothing about it.  What I've heard is that it's all about hating Trump.  And as I flicked on the TV this morning that sentiment seemed to be illustrated with mothers hanging sandwich signs around their six year old daughters that read "Trump Is Mean!", or "I Hate Trump".  I guess teaching hate is started earlier these days.

I've also heard that there are actually two groups of women, marching at different venues, because it seems almost natural law that if you get enough biddies together they are gonna start fighting among themselves and nearly forget the original purpose of their protests.

I find almost all marches suspect.  I've never understood how there could be so many people who have the time to march.  Most people have jobs to go to, or chores at home, or some such as helping the wide swath of illiterate children with their homework, lest they end up flipping burgers for a living.

But, nope, there are apparently tens of millions of women who have lots of time on their hands.  So they put on their meanest face, adorn themselves in protest regalia, grab a sign with some serious vulgarity printed on it, then head out to the streets of a hundred cities, to let everyone know they are pissed about something.

Some of them are pissed about a female desk clerk in a police station not making as much as the cop on the streets.  Or a factory worker spinning copper coils not making the same as the construction guy standing on a 50 story beam stringing that copper.   To today's women neither the strenuousness of the job, nor the peril posed when performing it should matter.

Also in today's march will be thousands of women marching to make sure someone else is paying for her birth control pills.  Or footing the bill for her spermal offal's free pre-school, free school breakfasts and lunches, and Medicaid Card.

Others are protesting border walls.  Still others are protesting the cruelty of a federal government that dares to put children at peril by separating them from they Guatemalan escorts....those people that dragged those same children 2,000 miles in hopes of  a free pass into America and it's free ride on the gravy train.

I guess if we pay attention to the signs today we'll get a feel for what has pissed them off the most this year.  Many thousands of them are pissed that their children have to endure forced vaccinations to attend public schools.  An equal number are pissed because their kids are enduring flu and measles and chicken pox outbreaks from parents who are NOT getting their children vaccinated.  Many more are marching to easing entry for illegal children..........so their own children's classrooms can be even more overcrowded and an overworked teacher will be able to teach no one.    But that's okay.  Those children can always grow up to be burger flippers and march in those $15 dollar per hour minimum wage marches.

Sigh.
Posted by A Modest Scribler at 8:12 AM