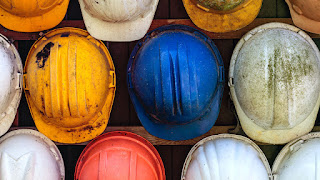 Travel down any road you choose come commute time in the morning. You'll see many sad, worried, fretting faces as they head out to their municipal clerkship, or to hawk mattresses, or to light up the lamp on the blue light special, or to burn up the phone lines trying to push a stock tip to a brokerage client.

Contrast that with what I witnessed yesterday morning, bright and early. A crew of eight men arrived in company service trucks, pulling into the curb...sitting there quietly in their cabs, taking a last sip of coffee before they haul themselves out and knock on my door at the 8 o'clock proscribed time.

The work foreman was, at first, the only one who entered my door. Wearing a smile he patiently went over with me the work they would be doing today. Meantime, ladders and tool boxes were hauled off the trucks and men began scurrying up ladders, or assembling metal elbows, checking their tool boxes for just the next tool they would need.

Every one of those fellows were smiling. Every one of them full of the life juices that comes when you are doing a job you love to do. And for the next eight hours they sawed, and they bolted and unbolted, and they carved beautifully fitted pieces of wall board, to fit over holes left from the remnants of a 60 year old air conditioner and only relatively old furnace. They did their work only after laying tarps across my floor, and covering furniture in plastic, and they worked their magic with a smile playing across their faces, their talk not of lousy foreman, or union matters, or government shutdowns. Instead they joked about a recent get together at a beer bar, or they teased one fellow about his upcoming nuptials, or they sang the praises about the two Hispanics on the crew who had taken them to a place that served habanero enchiladas.

These were blue collar men, enjoying their work, satisfied at being paid a fair wage for a fair day's work. These were men who knew they were being paid better than 90 percent of the white collar and tie crowd. And they did not long for the superficial adornments of Cole-Haan dress shoes and weekly office conferences.

At one point I tentatively approached the youngest guy on the crew....a kid not yet old enough to drink. I pointed up at the side of my house and showed him a piece of flashing that had come loose. I wondered if he might, if he had a spare moment while up on the roof, might secure that flashing in place for me....for a fee I assured him.

His right hand was in a cast and he nodded his head and smiled and said, "sir, it would be my privilege, but I won't charge you anything for it." I tried to insist and he refused.

When I went out later I saw that the kid has tin-snipped and shaped a portion of new flashing, then secured it in place, then had used my extra house paint to re-paint the replaced flashing. I have to admit that my heart caught in my throat and I had to turn away, lest someone see a set of misty eyes.

At the end of the work day I again approached the kid, trying to press some money in his hand. He again refused, then said "sir, if we've done a good job for you, just let the boss man know", then walked away, happy in his extending a kindness to an old gent.

That was the way it was all day with that blue collar crew...from the guy who patiently walked me through my new wi fi/smart phone enabled thermostat, to the guy who, on hands and knees, used his shop vac to vacuum a microspot of sawdust on my floors.

That blue collar crew did far more than install a new HVAC system. They restored my faith that there are good men out there in America....men who wear hard hats and blue jeans and work vests and steel-toed boots, who may be America's last hope.

Thank you, you Blue Collar People. Thank you very, very much.