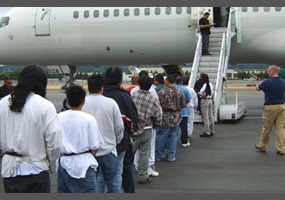 Economics 101
So the U.S. Labor Department reported this morning that a whopping 312,000 new jobs were created last month. That is second only to last springs 324,000 jobs created during President Trump's Presidency.
Curiously unemployment rose from a 49 year low of 3.7 percent to 3.9 percent. Let's look at the factors that seemingly made those numbers appear at least a little in conflict.
First of all the unemployment rate rose slightly because hundreds of thousands of Americans rejoined the labor pool, looking for work. Why did Americans rejoin the search for a job?
Could it be that Congress recently passed legislation that makes it harder to get food stamps? Could it be all the talk in Washington about requiring able bodied Americans to look for work while drawing a welfare check? Could it be the 3.12 percent increase in wages, driven by businesses more willing to pay a living wage after Trump's tax cuts? Or could it be that American businesses are finally foregoing cheap Chinese labor in favor of American workers? Or could it be that American companies are avoiding Trump's tariffs and finally manufacturing more in the U.S.? Or could it be that Trump illegal immigration efforts have finally stemmed the tide of the illegal invasion.......thus opening up positions for American workers? Have at least some of illegals begun to self deport? Have employers finally awakened to the financial penalties imposed when hiring illegal workers? Or could it be that Americans like keeping more of their paycheck, thus find working for a living actually pays off?
I believe all of those things have contributed. Though Democrats are gonna hate today's news, today's number does speak well for any leader who is willing to champion free market capitalism, defend our borders and make better trade deals.
Is America "great again?" Way too early to say. We are under assault by a growing cade of socialists, both in academia and in government. But today's employment numbers, and growing GDP are certainly rewarding Americans with more than a "chicken in every pot".
Today's huge job numbers stunned our economic gurus. It really shouldn't. A combination of factors have contributed to a vastly improving economy, most of those policies implemented by Trump, whose contributions were largely just getting the hell out of the way to let a little more capitalism rise from the economic kettle.
Posted by A Modest Scribler at 8:54 AM

Nothing really surprises these people. They are aware of the Countries potential with the right man in the White House. They just don't like that it is Trump, or any Republican for that matter. The Zebra we had for 8 years did EVERYTHING he could to keep us from being prosperous. And used every excuse in the world as to why he couldn't change things. But we people with Business experience knew he was full of sh-t. That anyone with more experience than a Community Organizer could turn things around. That's why Trump in 2016 and actually Ross Perot in 1992. I know you were Skeptical, Scribe but even with these low unemployment numbers, Jobs are still plenty and my paychecks having been getting bigger and bigger. Who the hell thinks that's a bad thing? Oh, yes. Liberals.

I find many faults with President Trump...his unwillingness to learn what he doesn't know....and his rhetoric. But I've always given him credit when credit is due. He knows business and he's helping us. As for Obama, well, we already knew his thinking. (Remember the owner of a business didn't build that business...government did.).