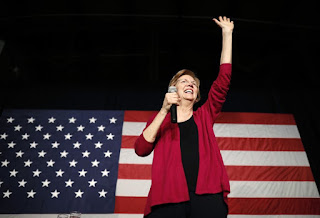 Evil Wampum
Senator Elizabeth Warren flew into Iowa this week, transversing the state, giving speeches to standing room only adoring supporters.
Warren spoke of her own humble beginnings, her own personal crusade in moving from poverty to middle class, her previous $350,000 dollar Harvard salary the only thing standing in the way of abject poverty. Her modest million dollar Massachusetts home, earned from her three hour per week teaching class load at Harvard in exchange for that $350,000 a year salary. Alas, now she must make do on a United States senator's pay and benefits package so she's cut back on further purchases of Indian Princess headdress and choosing not to add more beads to her jewelry chests.
Apparently Iowans love Liz. They swarmed her and fawned over her from the top of the state, all the way to the bottom. They loved her message that says every Iowan's trouble is attributable to the nasty rich. And they lover her "MeTooism" messages about glass ceilings and back alley abortions, and the danger of having to pay for their own birth control pills.
Just as Democrats flooded the polls last November, to win control the U.S. House, these Democrats are not happy with their tax cuts, or their bigger paychecks, or their farm ponds no longer being administered by the EPA. They're just happy to support anyone who might beat President Trump in 2020.
Turning Iowa blue is the party goal. That's evident as their current Democratic candidate for governor is running neck and neck with Governor Terry Reynolds, who has only managed to implement the biggest tax cut in Iowa history, while running up a budget surplus of $127 million.
These "new Iowans", these "blue Iowans" would rather have Liz. She talks perty just like Barack talked perty. She gives them a villain to root against. She promises them more generous government benefits and will tax the fat cats into poverty to achieve that goal.
Liz does not explain what will happen to the economy when those fat cats...the job creators...perish from the earth. Let's face it, those "fat cats" will give up risking their capital if any gains are taxed at 90 percent. And, just as with Barack's massive failure to jump start the economy, should she fail she never has to say she's sorry. It's a "love story" that will never end.
Senator Warren's favorite tag line is "the system is rigged against the poor and middle class." She does not explain just how...but it sounds good. My guess would be Ms. Warren does not want to hear how the fellow over in neighboring Omaha began building his fortune by delivering newspapers as a kid, and selling magazine subscriptions. Warren Buffet, and his $150 billion, would send a totally different message. Nor will Ms. Warren explain how making a thousand dollars an hour in a Harvard classroom is a perfectly legit way to make a living.
Posted by A Modest Scribler at 10:51 AM

Isn't it wonderful how the Left keeps trotting out these Phonies and people are just dying to eat them up. Any Candidate running against Pocaphony that is unable to exploit her deceit, isn't fit for ANY Government position.

The left relies upon sloganeering as a main campaign strategy. Create a fairly short, rather nonspecific phrase that implies (but does not specify) something and repeat it constantly. What they actually propose is left out until the end, and even then, is usually misleading, if not a flat out lie. The Dems are relying upon hatred for Trump to motivate voters to support the Dem challenger regardless of what they propose. If the economy remains strong (and that's a big if), a Dem victory would be the first time in our history the electorate voted against their own self interest. Should that happen, it will set the stage for the failure of the nation.

Agreed with everything you said, Randy, until you got to elections. I believe the 2018 election was the first that Americans voted against their own self interest. The Democratic control of the House stops everything in its tracks , except for possibly one more Supreme Court selection.