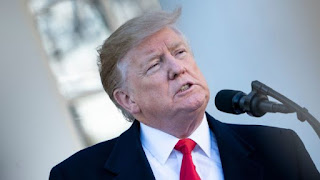 Dear President Trump
You folded like a cheap paper plate.  A few realities to offer you.  Living and governing with principle is hard.  You chose not to when the heat was dialed up.  Had Washington folded after the Battle of Manhattan we'd still be speaking with British tongue and eating haggis.  Had Lincoln surrendered his principles the Blacks would still be slaves.  Had the 1940 Congress folded FDR would have himself 12 liberal Supreme Court judges.

You folded.  Plain and simple.  I might remind you that, until Friday afternoon, you had about 39 percent hard core support.  You now have about 30 percent.........probably the same people who you talked about when you said you could shoot someone on the corner and still have their support.  Not me.  That 39 percent was critical.  Come 2020 you might, just might have roped in the 12 percent you need for re-election.  Now?  Forget about it.\

I'm an Independent....among the 9 percent cheering you on because I wanted that wall as much as you.  Not so much that it would stop all illegal immigration (we can't do that until we start enforcing E-Verify and rounding up Visa Overstayers.)  The wall was as symbol that we are serious about getting control over our illegal immigration.

But you folded....partly because you feared the aftermath of the pain the shutdown caused...partly because you didn't understand the Democratic base.  First of all, whether you revive the government or not, you'll still be blamed for the shutdown.   So what would it have hurt to let Chucky and Nancy squirm awhile.  Secondly, and I hate to break this to you....you were probably two more missed paychecks away from winning.  You were right when you said government bureaucrats largely vote Democratic.  And one thing Democrats love is government gravy.  Take the gravy bowl away for too long and they would have come screaming to Pelosi to let that god-damned one half of one percent of the federal budget go toward building that wall.   But you couldn't hold out.........even after your cock sure tirades that you'd never surrender.

Then you did.  So, you lost me.  You are no more principled than your wishy washy Congress on both sides of the aisle.  Worse, you are now weakened and bloodied and, worse, laughed at and derided even more, joined in the merriment by the 9 percent of us you lost yesterday.

Please don't tell me you'll shut down the government in February again.  You won't.  You may try to declare a government emergency and appropriate money from other agencies to to build your wall.  But the liberal courts will adjudicate the hell out of that and you'll look even sillier.

Your chance was now.  And you blew it.  You're one of those tissue-thin Walmart paper plates that collapse when the first 4th of July rib bone hits it.

I feel your pain. Truth is not much has changed. Trump is still preferable to the gal he beat. No Democrat deserves to be the President. The House will still oppose everything Trump supports. Little legislation will be passed (good). And in 2 years, we'll see what the nation is to become.

All true, Randy. And although I knew he was flawed, I had hopes that he would grow into the role.....to be the President who his core elected. This is first massive fail (other than those endless idiotic tweets) but I suspect, come 2020, I'll be pining for Trump as we go Socialist.

AFR Dynamics offers the same day emergency repair services at no extra so that you don’t have to go a single day without the comfort you deserve. Our experienced technicians thoroughly assess the A/C systems and provide full-service repair at lower costs.

I agree with you 100%. These politicians see themselves as actors in some grand drama, just acting out a role in a play. They have no concern how it affects the man on the street. I heard an interesting opinion that Trump gave in because his rich friends need to travel to the Super Bowl next week. After they are home, he can do another shutdown claiming the democrats never gave him what he asked. Either way, he's a 1 termer.