A Wall of Lies 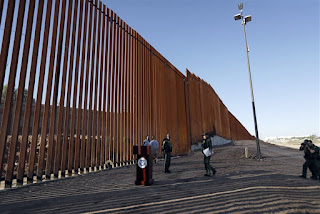 The media reported today that lawmakers from both parties are huddling together to try to come up with a immigration deal in order to head off another government shutdown, or a Trump emergency declaration to have the army build it, both options unacceptable to either party.

Ho hum.  Oh, how I have heard and seen headlines like this for so many years.  Who remembers that, just four years ago the Congress allocated $25 billion for both a wall and additional border agents, allocated less than $1 billion, and never funded the rest of the money in support of their own legislation?  Who can remember all the promises that the Feds would, at last, begin enforcing participation in E-Verify...and imprison employers who violated the law?  Who remembers when it was politically acceptable to round up Visa Overstays, charge them with a crime, then deport them post-haste?  And in that interim of political cowardice millions more illegals are safely ensconsed, the majority of them firmly affixed to a government tit for generous federal and state and municipal benefits?  How many people have died at the hands of MS-13 and cartel ferried drugs into the country? How many have entered a hospital emergency room and found it clogged with illegals?  How many have seen their auto and home insurance rates soar as home invasions and hit and run accidents, and stolen car rates soared?  How many more innocents and police will have to be gunned down by illegals before anyone takes this issue seriously?

So pardon my ho-hum.  This minuscule deal.....including Trump's own proposal, is a water-downed version of a much more aggressive campaign promised to us just half a dozen years ago.  Perhaps it is symbolic that news came today that Trump, our most aggressive spokesman in support of controlling illegal immigration, just fired 14 illegal workers in his resort business.  That's two years after Trump took office and his business entity is only now promising to participate in E-Verify?

Most pitifully, President Trump himself, to win his half of one percent of the annual budget for border security, has had to retreat from call it a wall, Pelosi and Schumer having declared a border demarcation "immoral" and insulting to the 30 million Hispanic "guests" already here...and the caravans now on their way here.

Remember that $25 billion once pledged to secure our borders a few years ago...the one that never got funded.  Remember that as Congress trots out on the front steps of the people's house, beam brightly and pronounce a deal.  Sadly, we are wielding a fly swatter to fend off Godzilla, and bound to lose one of the most critical fights of our lifetime.

Posted by A Modest Scribler at 2:46 PM

For all the criticism of President Trump, he's the ONLY one at least trying to protect the nation. Forget Congress when national security is at stake, but can will they screech and cling to their I'll-gotten privileges.

I have praised Trump for his immigration efforts, though, deal-wise, he has not often chosen the right way to go about it. As for today's minor hit, he must practice what he preaches. Don't be filling the wallets of illegals if you want to be taken seriously.

I work in foodservice so I am surrounded by our "guests" everyday. However, a more critical problem is our schools. My daughter is now a senior in high school. Very often over the years when she requested help from a teacher, she was ignored as the teacher was overwhelmed helping non-English speakers. The students today don't receive half of the education we did forty years ago.

Jeff, other than those of us who care enough to study the problem, the school situation you mention is one of the least discussed plagues of the illegal immigration problem. And, even with those sub-standard educators, school budgets just keep going up and up. Most school costs now represent more than half of all state expenditures.