Strangling On Their Own Liberal Bias 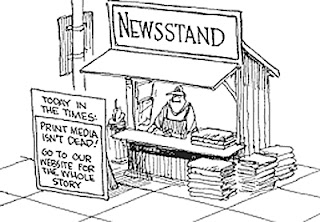 Last week our own Arizona Republic newspaper announced still another round of layoffs.  They got their marching orders from their corporate parent, the liberal Gannett Corporation.  Gannett currently owns USA Today and a hundred plus newspapers across the country.  And, as each once individually owned newspaper was bought, Gannet made sure they populated those newspapers with a liberal editorial staff.

Gannett had an especially difficult task trying to transition The Republic to a liberal publication.  The general populace is conservative.  About 70 percent of Arizonans are either Republican, or register as Independent, then vote Republican.  And since illegal immigration has been such a hot topic here in a state that is affected by illegal immigration every day, Gannet, being open borders advocates, began an aggressive campaign to make the ills of illegal immigration go away.  Once a week the paper published a multi-paged sob spread about the plight of illegal aliens.  Then they began censoring the news.  If an illegal committed a crime The Republic either didn't print the story, or actually censored crime news, extracting the identity of the perp, or refusing to print that the perp was charged with being here illegally.

Soon The Republic began championing liberal Democrats for elective office.  Democrats became their "choices"..announced prominently on both the front and editorial pages the week before elections.

Happily, or not, The Republic's circulation has decline precipitously.  As more and more folks realized they weren't getting an objective presentation of the news they stopped taking the paper.  In the 80's The Republic had a 50 percent circulation rate.  That number has declined to 6 percent today.  While part of the sharp decline in newspaper readership is attributable to our school system turning out illiterates, much of the recent decline has come as fewer readers believe they are actually getting the truth.

I cite the Republic's circumstances because it is the same story with all of Gannett's 100 plus newspapers.  And eventually the people that still read get it.  And they've stopped buying Gannett owned newspapers.  So last week, as Gannett's latest financial report showed them bleeding red ink, they sent out a directive to cut staff.

Strangely we see this all the time with liberal media.  For the last two decades they've tried to thrive in talk radio........and every liberal radio show goes belly up, even as conservative radio enjoys huge profits and draws huge audiences.   CNN and MSNBC trail Fox News by wide margins.  Alas, the liberal media seem happy to strangle to death on their own bias.   I don't know any other business that's willing to commit suicide for the liberal cause.