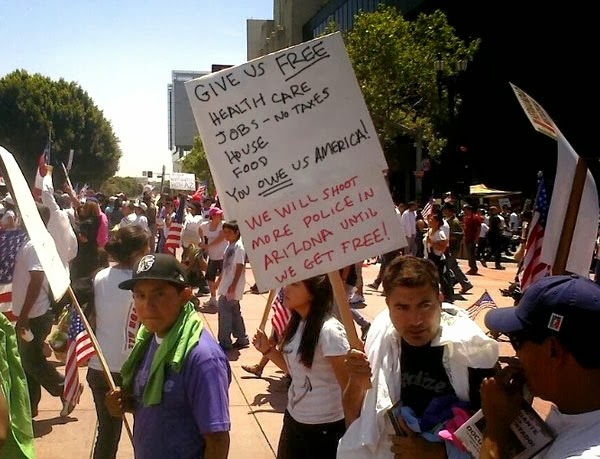 This issue of illegal immigration is quickly becoming nothing more than a political issue; all other factors are tossed aside in the wake of an overwhelming army of politicians jumping on the amnesty train.

Not considered are the burdens these law breakers will put on our already overtaxed social safety net, nor the ethics of rewarding those who violated our immigration laws, nor the punishment inflicted on those who have waited patiently for an immigration quota, nor the already crushing burden we are already bearing to educate, medicate and incarcerate some 30 million illegal aliens here, nor the sure incentive for even more Mexicans to invade and wait out another amnesty grant.

With the exception of Senator Jeff Sessions of Alabama and Senator Ted Cruz of Texas, I know of no other nationally known leader who has not caved into the Hispanic longing for America to be no more than an northern extension of Mexico itself.  We have become Mexico's "toilet", absorbing the most criminal, the sickest, and the poorest dregs of their citizenry, thus taking the burden away from their ruling aristocracy and drug cartels.

So many have now been absorbed into this country, legally through past amnesties, or illegally through invasion, that politicians are now no more than "whores" who cater to a hard-edged electorate of 20 percent or so who can make the difference between defeat and victory in a national election.

Next week Barack Hussein Obama will offer his State of the Union speech before Congress.  He has already indicated that he will tout the granting of citizenship to these millions of illegal Mexicans.  I can guarantee you that he will not bring up the chilling Health and Human Services statistic that shows fully 75% of illegals are now being given government assistance.  He will not mention one instance of home invasions, hit and run uninsured drivers, illegal gangs larger than most country's armed forces, the re-emergence of whooping cough, polio and other diseases that were once extinct within our society…brought about by whole armies of illegals who weren't vaccinated back in Mexico.  Nor will he mention that our IRS issued over $11 billion dollars in Child Tax Credit checks to illegal Mexican families last year, some of whom for children still living in Mexico.

And I can guarantee you this as well; not one Congressman or Senator will protest Obama's soaring amnesty rhetoric with a "you lie"..or even a thumbs down.  Most will cheer to the rafters, one eye on the television cameras in hopes that they are pleasing their Hispanic constituents back home.

I believe illegal amnesty is America's great moral challenge, the great litmus test that will determine if we have any chance at all to stem the tide of a massive Mexican invasion that will destroy any chance for us to restore our past glory.

We can stop this illegal amnesty if we still have the heart for it.  We did it in 2007, even overcoming Juan McCain and George Bush to make it happen.…yes, it took tens of thousands of telegrams, emails, mail and a million telephone calls that blew out the Congressional phone network…but it can be done.  The only question is "do Americans still have the heart and the courage to mount that kind of campaign?"

Only God knows…and only He will be the ultimate judge.

Amnesty for no-one! Send them home with their terrorist lobby "La Raza".I will be telling every one I can to call and inform their representative/senator "No Amnesty!".

No Amnesty! Vote every politician out if they're on board with this! We need to take our country back form our lame ass politicians.

I miss your writings but understand why, thanks for taking the time to do them.

Thanks, Brian…I'm still writing often…just posted three days in a row and never less than every other day. Thanks again.