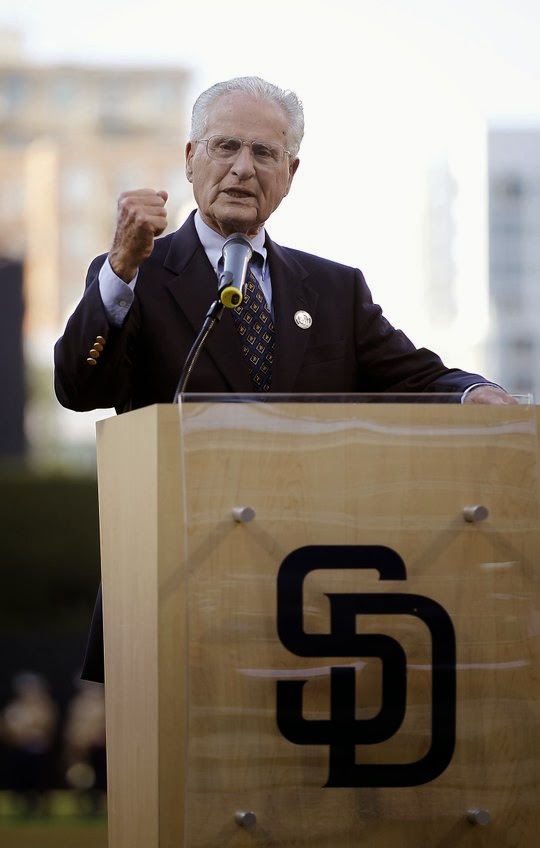 I'm going to write about Jerry Coleman today; someone who more than half of you have never heard of.  Your loss.  Jerry was the purest form of love, the most decent human being one could ever hope to meet.

Jerry Coleman was the baseball broadcaster for the San Diego Padres for four decades.  Jerry Coleman was the worst baseball broadcaster I've ever heard.  His achilles heel was that he loved the game so much, had such excitement for the game, that he would get caught up in the excitement of a spectacular play, or a dramatic score, that he would completely forget to tell you what happened on the field.  When I lived in San Diego and listened to Jerry call a game I have frequently been driven to pick up the radio and throw it against the wall, such was my anger at this bumbling broadcaster who couldn't contain his excitement long enough to tell the listener what was going on.

Jerry Coleman was a young man when World War II broke out.  A slick fielding second baseman in the Yankees farm system, when the war began Jerry joined the Marines and became a Marine aviator.  He flew more than 50 missions in the Pacific Theater winning more than his share of chest lettuce, including the Distinguished Flying Cross.

After the war Jerry came home and won a spot on the great Yankee teams of the 40's and 50's.  He was selected Rookie of the Year, batted 275, played second base flawlessly, and helped the Yankees win all of those World Series championships year after year.

At the very height of his career, like the great Ted Williams, Jerry was recalled to active duty for the Korean War.  Giving up his lucrative baseball career, Jerry was again in the Marines, flying slews of bombing missions over North Korea.  He narrowly escaped death a dozen times, surviving flack hits and malfunctioning engines….and he collected three more Distinguished Flying Crosses and another few rows of chest lettuce for his Marine uniform.

Having given more than almost anyone to his beloved country, Jerry returned to his Yankees and his second base post.  His teammates said he was so nervous that day that they couldn't talk to him, he didn't even know who they were.  Jerry played a few more years for the Yankees, then served in the club front office for a time.  He would finally begin his broadcasting career, working with the great Mel Allen, and then later with Dizzy Dean and Pee Wee Reese on the weekly Saturday broadcasts nationwide.

Eventually Jerry would end up doing baseball coverage for the California Angels in southern California.  And then, when McDonalds mogul Ray Kroc bought the Padres, Jerry moved into the Padres broadcasting spot, where he would remain for the next forty years.

Jerry became an iconic figure around San Diego.  He never met anyone that he didn't greet with a smile.  Folks in his neighborhood could set their watches as Jerry set out on his morning three mile walks and when Jerry began doing promos for a local bank he felt the need to actually start banking with one that he was promoting so he would often walk into his bank branch and visit as if he owned part of it.  Folks who knew Jerry intimately say he never showed anger and never uttered a curse word.

Jerry Coleman is in the baseball Hall of Fame, respected and admired as both player and broadcaster, has been feted many times by both the Padres and Yankees, always received a boisterous ovation as he showed up each year for Old Timer's Day, but is most proud of his Marine service.

Right up to his death Jerry, at 89 years old, was healthy and fit, as youthful as someone three decades younger.  Sadly, like the mishaps of many of the elderly, Jerry slipped in the bath back in early December.  In and out of the hospital in the weeks following, he died from those injuries Sunday morning.  He will be missed beyond measure and that San Diego sunshine is just a tad less bright this week.

Rest in peace Jerry.  You've flown your last mission and can now join your creator…and we are all better off for having known you.

P.S.  If you find that I am now moderating comments before they are published, that is because we had a flaming liberal use extreme vulgarity and I deleted him.  He has since posted over 50 times the same rant that I won't let him use this blog for his own personal libtard crusade…thus, I cut his water off.  All comments will now be reviewed before they are published.  I will later change the settings to allow all comments by certified 'followers' only so we know who's inflicting the spam.
Posted by A Modest Scribler at 4:48 AM

It would seem just letting this clown vent, would 1 expose him/her, 2 just get it out their system and all could carry on. To filter everything seems kinda "big brotherish"

Pretty sad. If someone wants to be an idiot they should get their own blog and leave ours to us. Just sayin. 😡

Sad to learn another great aviator and individual has passed.Good luck with rooting out the troll.

Anon; re, "let the clown vent"…please tell me what this post contributes to the conversation (one of his many):

Please tell me what social redeeming value that has…nope..i'm not letting someone come over, shit on my front porch, then sneak off anonymously. Sorry.

Dear readers; i've been bombarded all day, hour after hour, by the vulgar libtard trying mightily to get through and post…(one or two anon posts that i did allow sound like him.

The guy is obviously extremely jealous; he is unable to articulate his own philosophy in words and wants desperately to drop one liners that he deems clever.

So, rather than write his own blog, because he can't he chooses to hang around here. So, from now on, all comments will be moderated; that means if you don't see your comments posted immediately it is because it is awaiting my review. I'm here often during the day so, if you're decent, if you're not vulgar, be you liberal or conservative, if you can offer a rational debate to anything I write, your comments will be posted…if not, you'll be deleted. As you know, we've had this problem before and we'll always deal with it. Thanks for your patience and understanding.

You eulogize Mr. Coleman just beautifully. Almost as though he was an extremely loved brother. Thanks for this column, it is so nice to have one of these pop up every now and again laid in amongst so many blogs I read. I don't know why, but I do spend a great deal of time here reading several of these blogs and the last several years I have seen most all of them definitely taking a very sharp downhill path talking about the sad woes of our great nation. My responses have followed the same path, to the point that I don't contribute nearly as much as I once did. Just seems a depressing and futile effort.

HOWEVER, when I come across one of my pal, Mr. Scribler's, pearls, I stop and read it slowly and sometimes, over and over! You do have a way of taking me back to a once loved neighborhood where, like San Diego (my hometown BTW) the sun shines every day. A city that felt like a town and one that I love so much and miss even more!!

We moved to the San Fran bay area before I took an interest in baseball so my memories of Mr. Coleman are minimal but I leave your column and feel as though I know the man, thanks for that! He does sound like I guy I would have enjoyed hating very much! Thanks for taking me back, again!


Regarding the hemorrhoid plaguing your column; I think you should allow him/her through once or twice, we, your loyal readers, would love to smack him/her around a while! I do notice that their comments were deleted but the comments of the rest of us are almost 100% talking of your "pile"

As always, thanks, Ken. I too enjoy writing profiles of people I admire, either living or dead. I too yearn for a more loving world and wish I didn't need to fight the political fight.

As to allowing the libtard to post, if you go back a few blogs you will still see his "one liner" comments..they add nothing, although, yes, it does fuel the fire for the more rational minds. i would hope that you see I allow liberal posts that disagree with me…and have quite a few good exchanges…I just don't like those one line snarks that contribute nothing and defend nothing.