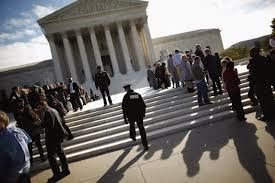 Lest anyone doubt that America is now ruled by one dictator and an entire army of liberal court judges, we have only to look at the happenings this week to see who's running the store.

The Florida courts on Monday struck down the new law that would have required welfare recipients in that state to be drug tested before receiving state welfare benefits.  The courts ruled requiring welfare applicants to be drug tested violated the "search and seizure" laws in the United States Constitution.  They said asking applicants to be tested for drugs was too intrusive into the personal lives of welfare candidates.  The judges refuse to consider the already sanctioned requirement that workers are routinely tested for drugs prior to being hired.  They considered that a "voluntary act" by the prospective employee and had no relevance to the Florida welfare law.

Several months ago the Mexican Extremist Group, La Raza, teamed with the American Civil Liberties Union to contest Arizona's Prop 100, which denies bail for illegal felons.  While the appeal was struck down by the Arizona Supreme Court, the ultra liberal 9th Circuit Court of Appeals has agreed to hear the case on appeal.  The ACLU and La Raza argue that denying bail to illegal Mexicans is a violation of their rights.  The state argues that allowing child molesters, armed robbers, felony hit and run prisoners, rapists, and those charged with manslaughter should be denied bail because of they are high risk to flee back into Mexico to avoid a long prison term.  La Raza argues that illegal felons are no more likely to flee than any other American criminal.

On January 1st the Boy Scouts of America finally relented to unyielding liberal pressure to admit gays into their organization.  Anticipating this decision, over 80 percent of Boy Scout troops who are sponsored by various church groups have seceded from the BSA and formed a separate organization called Trail Life, USA. The newly formed organization will continue to oppose the gay life style.  Headquartered in Florida, Trail Life, USA has already come under fire by the ACLU who are preparing to seek an injunction prohibiting the admission of gays into the new organization.  When an AP reporter queried the ACLU about this, the ACLU stated they will continue to fight sexual discrimination even when these Trail Life troops are sponsored by a religious organization who follow the tenets of the Bible.

Over the last couple of decades it has become quite clear that the courts, and not the voice of the American people, will rule the day and make the final decisions on what we are to believe and how we are to live our lives.  Prop 8, which banned gay marriage in the state of California, was passed overwhelmingly by California voters.  Then, the 9th Circuit overruled the people's vote and told voters to go to hell.  The same thing happened when laws banning driver's licenses for illegals were passed.

Then just last year the United States Supreme Court ruled that our dictator can mandate that a citizen buy a product or service if big government demands it.  Thus, we are now forced by rule of law to buy Obamacare for ourselves…and for 30 million others who can afford a big screen TV, cable, and an I-Phone but aren't willing to pay for their own health care.

Legislation from the bench has become so weirdly popular and accepted that it seems it is expected whenever an unpopular bill is passed! "Don't worry about Prop 8, your gay marriage license will be ok after the 9th gets through with them!"

Then what of Kali's prop 187?? I was so excited, we won one! Then the 9th blows through town and takes with them our successful bill and hope that our state may be coming back from our trip down "Stupidity Lane". Since then, illegals have worn a well used path across our borders, tripling their population and sending costs to our taxpayers skyrocketing from $3 billion in 1994 to $10.7 billion dollars in 2012. We, along with the rest of the nation are sinking into the depths of financial ruin caused by the perpetual liberal orgasm. I chat with liberals, some of whom are actually bookkeepers and business owners who find my logic lacking and believe wholeheartedly that we need our judges to sweep up after conservatives blow it at the voting booth.

How did you feel, after waiting all those winter months, when all the optimistic reports were coming out telling us that the Supreme Court can only rule in favor of overturning obamacare, "it's the law", we all said, "obamacare is unconstitutional all the experts at Fox said"!! Justice Roberts will deal the death nell to obama's dream for sure. I felt my stomach become twisted with nausea and tears welled up in my eyes when that fucking son of a bitch delivered that ruling. That was the end of us. The new guard is here and they have taken charge. We said it was OK for Bill Clinton to lie, why should anyone else maintain any sort of integrity anymore. Our Constitution has become so much toilet paper.

When will people realize that "great society, progressive, socialism/communism" will not work.They imply that the educated opinion is that it will work, if only the right person is in charge.Their education did not include history,which clearly shows that all attempts have failed.Ron White said it best "You can't fix stupid".

It's tough to get over the BSA breaking their tradition just to satisfy such a small minority of their organization. It broke my heart when I heard they gave into the gay agenda, but god forbid we offend the minority.

Always good to read your blog, best of luck in keeping the nutjobs from getting to you.

Ken, Craig, Trevor, as a student of history, I don't think I can ever remember a time when the three pillars of our democracy is so out of whack. We have a dictator in the Oval Office and liberal overlords dictating the law.

Sad indeed…to be corrected only by the fresh blood of tyrants and patriots, whenever we are fortunate enough for it to begin.

"are" so out of whack, not being a dick, just pointing it out.;)

thanks for the correction, anon…yeah i do that subject verb agreement with complex sentences now and then…thanks again.