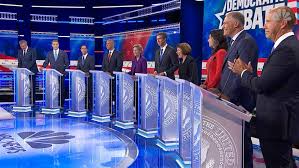 Caught snippets of the Democratic debate Wednesday night. (Keep your enemies close). Thought I could no longer be surprised by anything the Democrats say.......but I was wrong.
I was stunned to learn that more than half of last night's thundering herd were for open borders, the elimination of ICE, instant citizenship for all invaders, and a little federal infrastructure money to build bridges and escalators so that Hondurans, Guatemalans and Mexicans might find it easier to get here. All were in favor of treating illegal immigrant children better than our own native born kids.
Three of the candidates went all "dial 2 for Spanish" on us, speaking in Spanish so that California illegals know who to vote for. When Raul Castro began rolling his "r's" Corey Booker immediately began summoning his Spanish I high school lessons and joined in.
And, as ten or so Gringos stood silent, O'Rourke, Raul Castro and Corey Booker participated in a few exclusive snit fits over which of their home places had the best Taco/Enchilada/Rice and Beans combo.....all three of them advocating for the complete elimination of all immigration laws. And I kept waiting for the moderators to follow up when "The Three Amigos" proposed flooding Central America with American money to stave off the immigration crisis. Kept wondering which corrupt dictator they'd trust with our billions in charity. Neither Chuck nor Rachael bothered to ask.
The rest of the debate was pretty mundane. Liz "Pochahantas" Warren was for the federal government taking over everything, including private commerce. And the candidates, when asked about our greatest security threat, cited plastic grocery bags, Israel and Donald Trump as our greatest enemies.
For those who didn't bother to watch, there really was no debate. No one really challenged anyone else, no matter how wild the premise, and Lester The Molester, Chuck and Rachael kind of just sat in their moderator chairs, hands knuckled under chins, casting adoring eyes on the gaggle of Democratic candidates.
On Thursday the second contingent of candidates will hit the stage. Given that debate candidates will be given only one minute to speak, I'm trying to imagine Grandpa Joe Biden stepping up his speech cadence to pimp the 8 years of triumphs of the Obama regime.....that mad Arab Spring when the Middle East exploded, eight years of puny 1 percent economic growth rates, lines in the sands declared, then forgotten, and the hijacking of a third of the American economy with Obamacare.
Sigh.
Posted by A Modest Scribler at 3:00 AM

Suffered through it. All of it (Know your enemy). There was no debate because the entire field believes in the exact same policies. Said it before: America has a clear choice in 2020. The Dems are open socialists and advocate policies that are inconsistent with a constitutional government. If they take control of the Executive and Legislative branches in 2021, within two years the country will be forever changed. What little is left of liberty will be gone. If that doesn't provoke a shooting war, nothing ever will.

If we could only go back thirty years, when we had journalists and they had a backbone.

Began in the '60's when the media decided to remove Nixon. They have been hard core leftist partisans hiding behind the 1st Amendment ever since.

True enough, Randy. But even then we still had a few Roger Mudds and that Sam guy to ask the tough questions. Now? Meh.