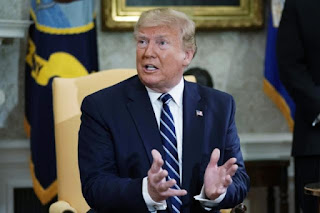 In my last post about Trump I pretty much washed him out of what's left of my hair. The only way I've been able to cheer Trump is by concluding that he was better than Hillary. And I could cheer him only if I saw him as a tool for what I wanted to see get done....not as someone I could admire.
I have never been in the "Trump is a wonderful President" camp. His morals place him somewhere beneath a snake's belly and he has, at times, made me fearful of his mental health.
His failure to fight for the wall, and against excessive spending, and this morning's last minute cancellation of a well earned "tit for tat" against Iran shows me he is coming apart at the seams.
So I'm pretty much done with Trump. I'm tired of his shenanigans, his demeaning of great men who served him, his disdain for everything that doesn't make him look good. And I'm exhausted by his empty headed blathering falsehoods and exaggerations. He's always been a clown..but at least he was "my clown"....shaking up the old Washington hands and appointing judges I could live with.
Now I don't much care if Ruthie Ginsberg survives or not. One more Supreme Court judge is not worth the grand embarrassment this President has become.
I suspect there are many like me..........scared to death of the social commies the Left is offering....yet without the heart to support Bozo The Clown for another four years.
Trump's greatest incompetence has been as an administrator. Some three years after taking office half of his administrative staff positions remain vacant. And even his cabinet plays a game of musical chairs. With respect to illegal immigration his ICE team gather up the invading illegals, bus them to the nearest municipal bus station, then release them into the general populace. Then, Trump announces he's about to round up millions of those same people and deport them. It's a schitzophrenic circus side show straight out of a Rod Serling story.
And I feel about the same way about the Republican party. They still fund Obamacare as if Barry was still occupying the Oval Office. They spend like drunken sailors, running up annual trillion dollar deficits, just as Obama did. They are nearly as sympathetic to illegal immigration as the Dems are. So, really, what the hell's the difference?
As to who takes the helm in January, 2021, who the hell knows? And does it really matter? If the Dems want to up the tax on the top 2 percent, or top ten percent, who the hell cares? When's the last time Silicon Valley billionaires, or Wall Street hedge fund managers did something for you? And though it goes against the grain, if Dems want to tax the super rich and give it to the lazy and unproductive, well I say what's new about that?
Bottom line: I've pretty much given up on trying to restore the American ethics that once made us great. Both parties have shown they are not up to that task. So horde the toilet paper and get ready for America to become the next Venezuela....with rolling blackouts and socialist dictators managing the bread lines.
Posted by A Modest Scribler at 10:02 AM

Interesting viewpoint. You have no appreciation for the fight he has to get any little thing done.Glad it's just one persons viewpoint and has nothing to do with the real world. You seem to be heading in the wrong direction. More and more people are realizing what he's up against and are nowhere NEAR abandoning him like you. Shame on you, Scribe. But this is America and you're entitled to your opinion and free to express it. We didn't vote for a Saint. To the contrary. We knew EXACTLY what we were getting. Who/what/what he did before becoming President had no bearing on the job he would do. He's the Boss, always has been the Boss and has/is very successful at it. Still. is. Economy, unemployment, ridding the Country of Obama's stench is far more important. Everything takes time. He just has to pick his battles. Too many battles at once weakens the whole Army. You, especially should understand that. We'll vote him back in for another 4 more years. Trump at his worst, still beats any Democrat Communist by a mile.

I completely understand your post this morning. Trump can be exhausting. However, Frank is correct in his assertion that any Democrat would be much worse. I voted against HRC, not for Trump. That said, the MSM, every Democrat, and half of the Republicans have opposed every thing he supported. I'm not sure if I really believe you when you say it doesn't matter who takes office. I've read you for years. If this really is your viewpoint, that Dems are no worse than R's, then we part ways. I am not a Republican, but I will never vote for a Democrat, especially today's version. I see a very bleak future ahead considering the eagerness of this generation to have government provide everything they desire while sending the bill to those of us that pay. Ultimately, that may be reality, but Dems will take us their at light speed verses Republicans. Take a break and reconsider what you said today. Your fatigue is obvious. I just hope it's temporary.

I think we'll have another 4 years of Trump, warts and all. After that I don't think a democrat has any chance of occupying the White House in 2028. Hopefully a moderate Republican will appear to strike a more civil tone in public discourse. Probably someone we don't see on radar yet. Maybe a virtual unknown bringing us back from the excesses of Trump but very far from the socialist path the democrats wish to follow. It will definitely be some interesting drama the next few years.