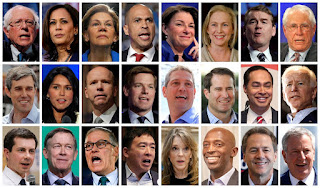 Note:  Yesterday one of the blog readers instigated a personal attack regarding another's comments.  (He knows who he is.)  In the future I will delete comments from anyone who chooses to get personal.   A feisty discussion is fine....attacking others is not.


This week the 25 (count em...25!) Democratic candidates for President will take to a South Carolina stage and try to "out-give" each other.....promising supporters a sweet life, where everything is free..and a natural born "right".
I have a theory about this year's plentitude of candidates. I think it comes down to the poverty of character all 25 of these people suffer from. This field is rife with minor characters, from municipal mayors to congressmen and senators who have, to date, nothing to show for their time on earth. Consequently, every Tom, Dick and Harriet rightly feel that they are just as bad as their fellow candidates and deserve a shot at the brass ring.
This week's debates, spread over two nights to accommodate an unending parade of government benefit promisers, will be limited to MSNBC and CNN, the latter media toad added only at the last minute when Democratic party leaders felt that limiting debates to their biggest media toady was too elitist.
Let me spare you from wasting your time watching. As is always the case (but even more so this year), Democrats will promise to punish the top 2 percent of earners (who already pay 37 percent of all taxes) by hiking taxes on the hated rich in order to grant government benefits that, in previous years, would be considered pure fantasy. And, no, it doesn't matter that more than 60 percent of all Americans now pay no taxes at all. That's not good enough......America now must have "income redistribution."
So the "Carnival Barkers" will be out in full force this week. Like the Carney you might have seen at the county fair, they'll be hawking hoochy-kootchie dream boats inside the tent...when in fact all that exists in the tent are snagglej-toothed old hags. 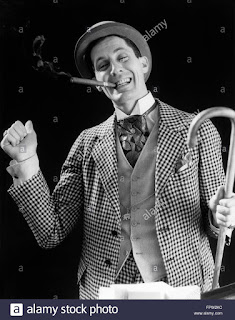 But, as P.T. Barnum once said, "there's a sucker born every minute"...and the Democratic party is populated by suckers who'll buy into the notion that you can tax the wealthy into submission and extract from their coffins free healthcare, free college tuition, a doubling of Social Security pensions, slavery reparations, elimination of $2 trillion in student loan debt, free all day kindergarten, free healthcare for 30 million Hispanic "guests" and a $32 trillion dollar environmental revolution that won't increase the deficit a single penny.
"So step right up, ladies and gents, pull the lever and get free admission to the "Garden of Eden" show where everything is wonderful and everything is free".
I guess what I hate most about Democrats is the disdain that they have for us as a people. They believe we are all ignorant and inept and totally incapable of caring for ourselves. They are an insult to every thinking man and woman. And I guess that's why it takes 25 of em to "carney bark" all that they'll do for us
Posted by A Modest Scribler at 3:00 AM

I contend that for a nation to try to tax itself into prosperity is like a man standing in a bucket and trying to lift himself up by the handle. - Winston Churchill

I can't wait until it progresses to "I promise to cure cancer" or even "I'll feed every hungry child in America", then there's "take every gun away". They haven't touch the surface of lies the Left will believe. Hold on to your hats Ladies and Gentlemen. It's going to get windy out there. Oh, and that wasn't a personal attack. It was a tongue in cheek alternative(to the Trump Presidency) reasons why he didn't get his raise. Tsk, tsk. When your blog gets touchy, you must be catching the "Left Flu". :) Ta ta.

Many, if not all, of the Democrat promises of "free stuff" are unconstitutional. WHAT? That's right. There is no constitutional grant of authority for government to do any of it. No, you won't hear that from the media. Article 1, Section 8 lists 18 obligations of the federal government. That's all they are permitted to do. However, we have strayed far from the constitutional mooring that document was intended to provide. Listen to the rationale most of them offer for their plans. It's emotion-based. It is designed to appeal to feelings. As we continue to walk away from the concept the founders intended of a limited federal government of enumerated powers, anything goes. And that will be the end of liberty because only one entity gets to make the decision. It's you or the government, cannot be both. When it's government, you have no say.

Good point on Federal Overreach, Randy. That was spawned by FDR and subsequently grew to monster proportion. The only cure I see down the road is that monster national debt that, within ten years, the interest on same will eat up a third of all federal revenues. Then we either go the way of the Greeks, Italians and Spainards, or we declare outright bankruptcy. We will see the first iterations of it with states such as Illinois, California and New York.