Joe, We Hardly Knew Ya (Or Maybe Too Well) 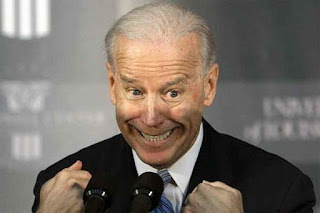 Thursday night the knives were out late, glistening brightly as the theater lights came on in Harkens theaters over on the east side.
Democrats were out in full force as Harkens hosted showings of last night's Democratic Presidential debates. After it was all over Kamala Harris's support rose, as did the gay mayor from "Notre Dame-ville". 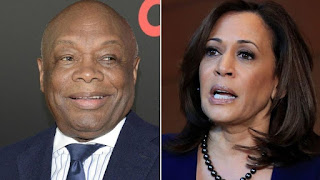 Only one thing was certain. Liberals squirmed in their seats, then threw Joe Biden off the bus last night. Joe should have known better than to enter this race. Hell, even I knew Joe ought to stay home and polish up his shotguns. In the new Democratic party anyone with a history is subject to having a cross slapped over your shoulder, to haul up Calvary Hill.
In Joe's case it was his position against mandatory busing back in the early 70's. Poor Joe tried to defend himself but Kamala Harris donned a metaphorical schoolgirl plaid skirt and white blouse and, in little girl voice, declared her virginal bus ride through Oakland in that long ago era. From then on it was all over.
In these Democratic primaries it is best if you have no history at all. It is ideal if you have accomplished nothing and never have taken a stand on anything. Anything a candidate did prior to "the new morality" is subject for persecution
Hey, if it wasn't busing it would have been something else...most probably a Biden gaffe and stumble, just as he did in two previous runs for President. (Please notice that Barack Hussein has not said one word in support of his monkey grinder VP for eight years....."you're on your own, Joe!")
The consensus among those Harkins Theater Democrats was that Kamala Harris played the race card brilliantly and the gays in attendance thought Pete "Butt-Gig" was kinda cute, awarding him the 2nd place ribbon. 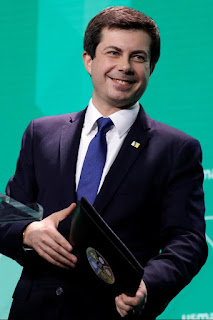 Bye Joe. You, the mad hatter that you are, were the least crazy on the stage last night....and crazy is what the Dems are shooting for this year.
It seems to me that the only things the Dems will accept these days is banging old men like erstwhile Frisco Mayor Willie Brown to get to the top (as Kamala did), or being at the top of the list for first gay President. Ah, if Petey Butt-Gig were only Black they could get a "twofer".
Yikes!
Posted by A Modest Scribler at 3:00 AM

I think there's 20 people that would ordinarily be in an insane asylum except we closed them down for some reason. This is reason enough to bring them back. I've got a script for a new movie titled "Twenty Flew over the Cuckoo's Nest".