The Sad Passing Of A Human Bouquet 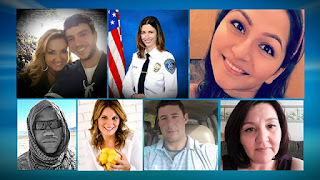 Just hours after the Las Vegas tragedy a CBS Television Vice-President hopped on Twitter to say she had no sympathy for the victims of the mass shooting.  Her reasoning?  They were country music fans and the majority of country music fans are Republican.

Of all the lessons we might have learned from Sunday night's tragedy, it ought to be how we dehumanize tragedy.  It's a perfectly natural thing, as despicable as that is.  The death of a neighbor two doors down might have a greater impact for you than a news report that 20 Marines were killed in Afghanistan this week.  By not putting a face on the victims, that CBS Vice President was able to place politics above a sense of humanity.

The problem with that is, the dead and the wounded and the dying are all human, with all the virtues and failings that all of us must own up to.  If we were to equate those victims to a flowers in a garden we find that some were lovely, some were less so, and some, like the shooter, were invasive weeds that one seeks to pluck in order to make room for more flowers.

Though we cannot personally know any one of the victims, as we see their faces, and as we learn about their lives, the immensity of the tragedy hits home.  Among the dead was a recent high school graduate...an honors student who challenged herself with advanced college classes, whose life was snuffed out before she ever had a chance to do great things.

When the shooting began a male nurse named Sonny climbed across his orthopedic surgeon wife, and took the hail of bullets so that she might live.  Other men did the same...gave their lives so that their mates might live.

Included among the dead were off duty police officers, seeking joy and peace at a music concert, an escape from the everyday rigors of their jobs.  A young university student died, record clerks were slain.  School teachers seemed overly represented among the dead, their students shedding tears for the loss of folks who were toiling to guide and educate them through their growing years.

A local resident, working 9 to 5 to raise three young sons by herself died on those dark mean streets just off the strip.  Her co-workers mourned her, and said they will sorely miss her perpetual smile and boundless sense of happiness.

An off-duty police officer, and coach of a youth football team passed.  So did a young woman from Massachusetts, whose sister was so stunned by the death, she turned to bible passages to try and make sense of senseless death, desperately seeking comfort as one seeks a sip of water in the desert.

A mother and daughter came to the concert, reveling in their mutual love for country music.  And, as the concert wrapped up, the 20 year old daughter was killed as her mother lay beside her.  One cannot conceive of the depth of sadness and despair that mother experienced.

All of those people were simply one of God's gardens.  A bouquet of His children snuffed out with the same cold and remote range of feelings that motivated a mad man to fire, and a CBS Vice President to claim they all deserved it.

Sadly, it is a pretty common occurrence that has become less shocking over the years. More Americans die here at home, we have created a battle field here. No, it is not the precursor to Civil War, just crazy people with guns. Easy to get, easy to use in a "free society".
Whoever become the victims, mostly children, blacks, yellows, whites, it is all pretty crazy to see any life snuffed out. Bad too when we expect it to happen again and again and don't do anything about it. A Congressional Study about Gun Violence is Against The Law!!! Nuts.

Jerry, after they take the guns away, what do we do about long knives, IEDs, vegetable trucks, dynamite or fertilizer, and airplanes, because, except for the "thugvilles", those are the things that have killed the most people. And there won't be a damn thing you could do to stop the bad guys, cause the good guys are unarmed.

the problem is becoming difficult to distinguish the 'good guys' from the 'bad guys'!