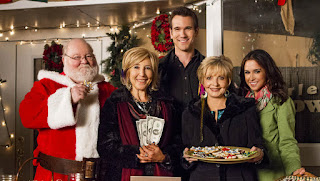 Well, last Friday, the 27th of October, the two Hallmark Channels began showing Christmas movies.  That is all time early....they used to start streaming movies the day after Halloween.  I guess the world is a bit scary these days so at least some folks want to zip through Halloween as quickly as possible.

Now, just in case you'll be out on a turkey shoot, or Black Friday (or Monday) Christmas shopping, or interning with ole St. Nick up at the pole, let me brief you on the two basic plots for these movies.  Young lady has boyfriend, except he's a jerk, she learns he's a jerk two thirds through the movie, then finally yields to the handsome, saintly stud whose been following her around for the whole movie.

The second scenario (and these are the most prominent) involves the story of either a single mom, or single dad who has given up on Christmas, upon which, at the most opportune time, a great spouse candidate comes along and saves the day.

In each of those scenarios the key players will kiss only at the end of the movie....and never end up in bed as normal healthy people would be.   Naturally those fatherless or motherless children fall for the new mom and dad like a crack addict with the next hit in hand.

Don't get me wrong; I love Christmas movies, and Hallmark runs two months of them.  But I readily admit that I really have to suspend belief when watching at least of half of this holiday fare.  For example, can you imagine how many men and women had to die for these scenarios to come to fruition?  And, by necessity they have to die young.  I mean, no one's going to watch a movie about two silver-headed sixty-somethings finding love under the Christmas tree!  The "surviving spouses" in these Christmas movies have to be at their peak of "hotness" in order to rope in the millions of American women who are watching....and fantasizing about hubby Albert, beer belly and all, kicking the bucket so they can be one of these Christmas widows!  And may I finally add, since half of American women these days breed without benefit of marriage, why even go to the trouble of killing off perfectly healthy 30 year olds?  I think American women ought to be used to the idea of single motherhood, since half of them feel no need to have an honest to god father in the house.  And, thanks to the American taxpayer, many of them are living just fine without a two-income household!  (Pardon my "scrooge-ness" there at the end).

So, now you know.  Don't worry about missing one of these movies while you're out trick or treating with the kids.  Not only are the plots fairly predictable, but, if you miss it, you'll have a chance to catch it again during the 2nd to 12th showing!

You're welcome.
Posted by A Modest Scribler at 2:00 AM