Pay No Heed Of The Man Behind The Curtain 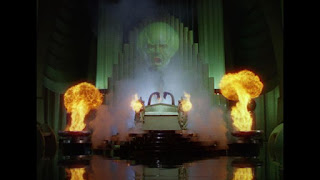 Do you remember watching The Wizard of Oz as a child?  Remember the scene where the trio are finally swept into the lair of the Great Oz, then tremble at the frighteningly powerful image of The Oz ranting up there on the screen before them?  Then, Toto the dog runs over and nabs a bit of the curtain over at stage right and peels curtains away, revealing a mortal man, far less certain, far less commanding than the image up there on the screen?

Well, I couldn't help but imagine that scenario, and I couldn't help but equate that scene to the Presidency of Barack Hussein Obama.  From the first day the man took office he engaged himself in mouthing elocutionary wonderful words, voiced grand promises far beyond his capacity to deliver on.  For eight long years all he seemed able to do is flit about the country and campaign for an office he had already won.

Obama was unable to improve on a Middle East war that he unendingly criticized during his campaign to win election.  In fact he eventually made it worse.  Even as he amped us his adoration for the Muslim world they became even more savage, more tone deaf to the arias he offered them.

As for the economy he led off spending a trillion dollars on shovel ready jobs where none existed.  And as he turned one group after another of Americans against each other; financially, racially, socially, the mixed breed, the multi-cultural Obama seemed only capable of dividing us.

Yes, Obama was that immense, baritone-voiced fellow up on the screen, there to impress, while, inside. he was merely the mousy little community organizer, busying himself trying to manipulate the vast, egoistic, fire and smoke up there for his public to see, and never able to instill trust, and, except for the vast hordes of liberal mice who followed him religiously, could never achieve the goals that America aspired to.  Consequently, in 2016, America, tired of the empty speeches, tired of the rhetoric, without success behind it, tired of eight years of "campaigning", they turned away from Obama and his party.

I'm sorry but I have to admit that Donald Trump compares favorably beside The Great Oz named Obama.  Trump may very well be too dumb to put on airs.  His personality, as psychopathic as he sometimes seems, is at the very least "who he is".  And, God help us all, but Trump's unintentional "shoot from the hip" vulgarity seems like a sip of cool water for those of us who had to endure the divine phoniness of Barack Hussein Obama.  He made our children eat broccoli and brown rice, even as he and Michelle dined on steak tartare.  He championed a public school system that is ultimately failing (and forced transexual boys into the girls restroom) and sent his children to private school.  He demonized the rich, even as he and his family lived the life of luxury.  He preached unity, even as he divided us; set one group against another in order to achieve a political aim.

Trump is not like that.  He comes to us raw and rough as a corn cob.  He is poorly spoken, often vulgar, and even at his finest is unable to inspire to any degree.  But at least with Trump we know what we have.....a man equally sheltered from his youth (Obama's sheltering came in the form of racial quotas and a desire by guilty Whites to coddle the finest speaking "Uncle Tom" anyone had ever encountered, while Trump's sheltering came by way of money.), yet Trump seems to understand the working stiff far better than Obama ever could!

The great national comfort, post Obama, that has settled on the "flyover America" is that, at least we know what we have in Trump.  He is, by nature and limited intellect, unable to fool us.  Hell, the only one that Trump seems able to fool is himself!

So, folks, it is my believe that, as disastrous as Trump has proven to be, he still seems far better than The Great Oz-Obama.  While liberals quiver and quake, and while the mainstream media are having office pools to see if Trump lasts out his first term, the rest of America seems relatively placid.  The stock market has surged, the housing market is heating up, business activity has picked up, and our allies and enemies both are in a state of shock...not knowing just what we'll do next.  And that's not always a bad thing after eight years of "kumbaya" that Obama offered...even as the world was being blown up.

It's "The Wiz" versus "The Lizard"...and, god help me, the lizard seems more appealing.  That fact does not speak well for a country abounding with people of fine character and intellect.

Posted by A Modest Scribler at 4:02 AM

In spite of you "Doubters", Scribe, Trump will succeed. He's raw and crass but only in relation to the fact that he ISN'T a life long Politician. He IS the shot this Country needed after the 8 years of deceit. His base is staying strong in spite of what MSM says. Looks like the Dems "House of Cards" is starting to fall apart. All the lies and chicanery they used to defeat Trump are being revealed. Time to get on the wagon, Scribe. Or you'll be left in the dust. Oh,and you're mistaking lack of intelligence for being clever. Even has you fooled....

Frank, I'm more than patient here. I haven't even called for Trump's report card. If I did the grades would range from one "A" for the supreme curt selection, and "C" to "F" on a few things....and a whole lot of "incomplete". I think I was more than fair to Mr. Trump in this essay. Waiting.............(while wishing he'd shut up for a while.).