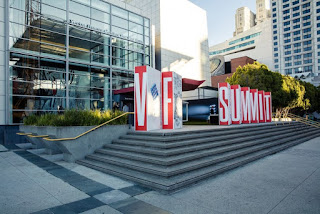 Last week, dear reader, from October 2nd through the 4th, Vanity Fair Magazine, that majestic masthead for liberal thought, conducted their annual Vanity Fair New Establishment Summit.  This year they are hosting the event in Beverly Hills, California.  In previous years they deemed their meeting place "the hive", meeting in San Francisco.

Those invited are the cultural icons considered to be the "cream of the crop".  This year we have billionaire moguls, Hollywood actors, pop music icons and studio chiefs.  Also attending are the giants of the liberal mainstream media.  Liberal politicians are invited, John Kerry being one of the latest bon vivants.  George Clooney too.

The event is sponsored by Hennessy Cognac, whose spirits will be ever present in warmed glasses, and Wolfgang Puck will cater the event.  BMW also kicks in dough, and chauffeurs attendees here and there, so that they never have to mingle with the blue collar ilk.

So what are those summits about?  Well, they first meet and schmooze each other up really good.  Then they sit around and conjure up ideas for raising working class to a nirvana of educated thought.  As Liberal media takes careful notes, they exchange ideas as to how to end war forever, how to make solar and wind power affordable for the masses, how to redistribute America's wealth, how to garner sympathy for the Black Urban Thug, how to disarm the masses, then they propose ideas to convey their wisdom through the mainstream media and "messaging" their philosophies through various movies, to include Disney animation.  (The two gays kissing in the latest Disney was thought out at a previous summit....to show young people that homosexuality trumps heterosexuality...cause it doubles your chances to find a date). 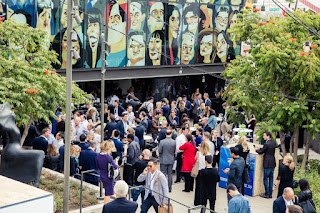 I understand that, on the fourth and final day, this select little group sits around, on yoga mats, and picks the people they'll demonize this year.  (We all know No. 1, right?)

Following the formal proceedings they all gather in a circle and participate in a "group tug" as Caitlin Jenner performs Swan Lake in drag...in soft pink ballet slippers.

So now you know.
Posted by A Modest Scribler at 2:00 AM

I like a good Hennessy Cognac, especially at Christmas time.

Yes, and I would love to be chauffeured about by BMW.

The Las Vegas Shooter missed on an opportunity to really be a Hero. THIS is where he should have been.

Frank, I'm pretty sure you just got on some agency's watch list. "Shooter" probably a keyword for those searches. We'll have to wait until the 2nd Civil War starts before we can institutionalize gun play, buddy.

Fortunately,I didn't post with my Google Accountlike normal. Hard to trace me. Besides, I was just pointing out that if fame is what he was looking for 59 nobodies is nice, but this would have put him on the map.

Frank, they have problem tracing you, no matter what route you took. If they wanted they'd know what you're having for dinner. :)

Are you kidding? It's taken them a year to find out if the Russians stole our elections and they still don't have a clue. They're not as good as you think(or they would have you think). Overrated.

Hard to find something when there's nothing there, Frank. I'm shocked that you bought into the Dems "Russians stole elections myth.