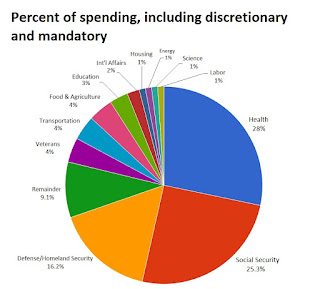 I suggest people hang on to this blog in case a misinformed Liberal wants to start a war of words in relation to Trumps first budget. Trying to do the right thing is perceived as anti Liberal by the left, and if you think about it, that's probably true. If they could ever get their head out of their ass and smell some fresh air, they might realize this is the start of saving out Children and Grandchildren's future. Nah. Never happen.

Three congressional investigations into Russian interference in the 2016 election have run into serious obstacles, and definitive conclusions are now unlikely.

And can anyone explain to me why we need 3 investigations? Don't these people have anything better to waste their time on? No wonder Congress is impotent(as opposed to inportant). From the New York Times. jeez. What a bunch of crap!

I have used usgovernmentspending.com for years to get this information. Absolutely correct in all your points and that's the scary part: Much of the spending is non discretionary - which means the cost cannot be reduced (absent a change in the law) and the increases just keep oming. One other thing: By law, every penny of social welfare spending MUST be paid in full every year. There is no carrying forward (adding to the debt) the cost of all the assistance programs. Between the cost of those and the increasing cost of servicing the debt, we're in for a bad outcome.

Frank, thanks much for the kind words. With respect to the multiple Russian investigations, well, I believe you already know the answers to your question. Smoke, meant to divert. And, getting back to the thesis of today's blog, wouldn't you love just once to see the Democrats proposals on budgeting? Their answer always seems to be "raise taxes".

Randy, you bring up a point that I failed to. The budget process is so convoluted, the model designed for failure. It does not give us hope for the long term. Some day the pols will be forced to fix it, but not now....not as long as our "credit limit" keeps being upped by folks willing to buy our debt.

Democrats aren't capable of thinking of anything besides "Raise Taxes". That's their logical reaction to EVEYTHING financial. Creativity doesn't exist in their dictionary. Reduce spending. Now THERE'S a concept. Those two words don't fit together in their version of the English language. It's so sad, one has to laugh.