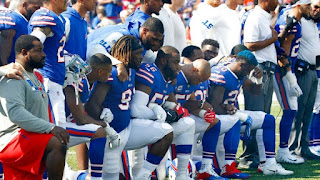 I've just thought of a novel and effective approach to solving America's epidemic urban crime!  I just wrote up a position paper and sent it out to the police departments in Chicago, Baltimore, South Central Los Angeles and Philadelphia

My suggestion is that those police departments mount a flag staff and large speaker atop every patrol car on the force!  They must then mount an American flag on that flag staff and begin blaring the National Anthem through that roof top speaker!  Voila!  Crime spree ends as thousands of Black thugs fall to their knees!  After all, it's a bit harder to fire a Magnum or Glock in such an awkward stance, and, let's face it, when they are on their knees they are not running down back alleys, or slipping through the front door of the nearest hovel!

That national anthem appears to immobilize the mightiest of thugs, as seen each Sunday on NFL gridirons....ought to work doubly well for the average street thug!

Should cut down on club brawls too!  It's only logical that, if you can't even see over the top of the bar, your capacity for violence is greatly diminished!

Now that I think about it, since both street thugs and NFL gorillas show a penchant for domestic violence, their women may want to carry one of those little 4th of July flags in their hands and download a version of the National Anthem to their iPhone!  Then as soon as "Elraythal, or Desmond, or Roscoe starts to raise a hand against them, the wives can wave their little flags and hit the play button on the Star Spangled Banner!  Kinda hard to do much damage at knee level, right?

Law enforcement can employ that same technique during Black riots as well!  As soon as the thugs set the first store front on fire, I suggest a parade of police cars roar down Martin Luther King Boulevard, all blaring the National Anthem.  Then when everyone takes a knee they need only walk about the knee-benders, cuff them, and throw them in the paddy wagon!  No need to run any of them down...and even if a few flee, they won't get far.  How far can one get when he's scooting down the street on his knees? 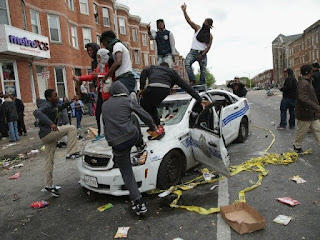 Folks, I'll probably get a Presidential Medal of Freedom or something for this idea!  I expect, by the time these departments get wind of my idea, they'll be sending me boxed chocolates and an honorary police badge!
Posted by A Modest Scribler at 2:00 AM