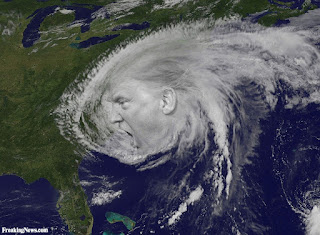 No one was more pleased with the arrival of Hurricane Harvey and Hurricane Irma than Donald Trump.  The two monsters were able to crowd out political news, the most remarkable being Trump's own stumbling.

Trump, author of The Art of The Deal, just made two of the worst deals in political history.  First he announced the suspension of DACA, then quickly met with Senator Schumer and Pelosi and declared "he really didn't mean it."  Trump, without asking for a single concession from the Democrats, promised he would sign legislation to grant amnesty to a million illegals.  And he did so without asking for a dime toward building the wall.

And, two days later, Trump again asked for $16 billion dollars for Harvey and Irma.  Except, again after Pelosi and Schumer fondling his crotch, Trump threw in a three month extension to fiscal borrowing deadlines....and again asked for nothing.

As Trump was giving away the farm, and throwing a grenade into the Republican Congress, Trump this week showed he's a foul-mouthed patsy...who just wants to finally be loved....at tremendous costs to conservative government.

Having shot his wad (on Nancy's black dress), Trump has become phone buddies with Schumer and Pelosi and has nothing else to bargain with...toward building the wall, or to force spending constraints on a Congress hooked on spending a trillion dollars more than they take in each year.  Can't blame this one on Equifax because everyone knows all of America's credit secrets already.

Trump has been a volcanic mess ever since inauguration, flitting about the country making speeches, a la Barack Obama, and getting nothing done.  Now, after seven months of ineptness, Trump is hungering for a little love...an escape from Twitter Land and the front page of the New York Times and Washington Post.

In making those bad deals over hurricane season, conservatives have learned that Trump can't be trusted.  ...either on immigration, or on the debt levels.  Why did Trump make those bad deals?  No one has an answer for that, just as no one has a guess as to what Trump will do, or say next.  But you can be assured that, whatever support Trump had from conservatives is now nearly gone.  Even RINOs like Senator Flake and John McCain were despondent over Trump caving into the Democrats on that budget extension.  And it assures that no one is going to be serious about budget cutting come December when the next deadline comes around.  In the spirit of Christmas, our government masters are going on a spending spree that will make us all sick when the bills come due in January.

Like Harvey and Irma, Hurricane Donald has left nothing but destruction in his wake.

Really, we had a pretty good idea this would be what a "Trump Presidency" would look like a year or more ago. Maybe we didn't get the "Devil Lady" but we got Trumped. Maybe American will come to her senses and these Teams will choose better players next time around. If there is one!

You may remember that, in a previous blog, I speculated that conservatives might do better if Hillary got elected. Then Hillary, who has on answers to any of our problems (in fact would make them worse) would fail and sour the American electorate on liberals for quite awhile. That speculation was just intellectualizing. However, when voting day came, my stomach would just not allow me to pull the lever for Hillary. It would have been like eating vomit. Trump, in my mind, is a disaster...but at least he got us a Supreme courts judge whose not bat-shit crazy. I still look at Ted Cruz was a sad nostalgia. He had courage and hard core conservative principles.

I keep hoping Trump is shrewder than we give him credit. Perhaps he is playing up to the democrats to let their guard down while at the same time putting the republicans on notice he won't be rubber stamping any of their old b.s. The next 2 national elections, 2018 and 2020, should answer a lot of questions. Unfortunately in a country of 300+ million people, the choices we have available are so flawed.

Reagan was the last principled and talented politician, Jeff. About time we find another.