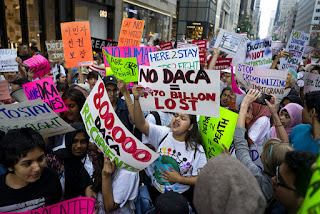 For as long as I've lived in Arizona the Gannett-owned Arizona Republic dedicates three to four full page sob stories about illegal Mexicans living here.  Well, you can imagine, given the DACA news this week, that the Republic would come up with a real tearful dandy for my Sunday morning paper.  They did.

The newspaper reporters interviewed a round dozen of illegal "dreamers" whose hearts were broken by Trump's cancellation of Obama's Executive Order on DACA, then threw it over to the Congress to constitutionally come up with something both legal and more permanent.

Two things struck me by The Republic's coverage of DACA.  One was that the newspaper didn't even report on a story about a 23-year old Nickolas Hernandez, "dreamer" here in Phoenix, who beat a 70 year old man nearly to death because the old guy ask Hernandez not to speed around school children walking home from school.  (Hernandez was already fresh out of jail on a work furlough....a liberal judge forgiving him for committing a robbery).  While I was not shocked that the liberal Gannett totally suppressed this story, (they censor Hispanic crime in all of their network of newspapers), I thought it especially cheeky to avoid this story, while painting halos on the head of their "ditzy dozen" dreamers featured today.

What struck me about today's coverage was the vast plethora of those dreamers who are either working in a government job, or are employed by a liberal political organization.  For instance, three of today's miserable "dreamers" were being paid to campaign for Hispanic rights organizations, or were paid "demonstrators".  Another was a district paid political hack for Hillary Clinton's campaign, while still another worked for an organization promoting Latino LGBT issues...."queer" being his favorite catch phrase.

So, boys and girls, when you see those signs bemoaning the fate of poor Mexicans picking your crops, or landscapers slaving away, keep your handkerchief in your pocket.  Most of those "dreamers" featured in today's newspaper were well paid, organizational bureaucrats enjoying fat salaries...not one of them ever walking in a lettuce field.  In fact, most of them were given in-state tuition rates by our local community and state colleges, even as American kids have suffered from a 1,000 percent tuition increases over the last decade.  In much of the Southwest a kid from Cleveland, an American citizen, will pay twice the tuition rate of an illegal alien.  On Friday our attorney general just filed a law suit against our two major universities, to put a stop to this inequity.  Given the liberality of our courts, I see little hope that he will win the suit.

I am now waiting for our Gannett owned newspaper to send a reporter down the the county jail...to interview that poor dreamer who beat up a 70 year old man.  I would not be a bit surprised to see that story next week....for the next version of "The Sunday Morning Soap Opera".

I'm with you, Carol. Disgusted and weary of all the distortion and lies.

Art.1, Sec. 8 of the Constitution allocates to Congress the exclusive control over immigration and naturalization. The Executve Branch does not have the power (with a certain exeption - US Code, Sec. 1182) to arbitrarily legislate on his own in this area. Obama played politics by creating the Dreamers simply because the Republican-controlled Congress refused to do his bidding. What Trump has done is put the responsibility where it lies. what Congress will do isn't really a mystery - the R's will not authorize treating the Dreamers like any other illegal (which they are). The next question is how will Congress protect the Dreamers, yet insist all other illegals be treated as the law requires? Answer: They won't. We'll have another (defacto) amnesty by late next year.

Not clear on that last part, Randy. Not sure if you meant Dreamers will have amnesty by late next year, or all the invaders. My feeling is the Dreamers will get their amnesty soon....this year.

i say next year because R's will hold out until it gets closer to the election, trying to convince the base they're serious about being "tough on immigration". Then, they'll pander to the illegals, worried about losing those brownn votes (won't help, though - Dems own 'em).

Fair enough....we'll see who wins this one.