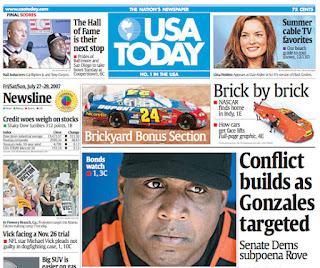 Last week USA Today celebrated their 35th birthday.  I still remember first seeing USA Today on the newsstand.  Of course, like everyone else, I was struck by its cartoon colors.  In those days our news came in serious black and white.  One read of the newspaper told you that this was not a serious newspaper...three fourths of it nothing but big weather maps, sports stats and entertainment fluff.  If some foreign conflict broke out overnight USA Today would lead with a front page story about cast conflicts on the TV show "Three's Company".  Very sad.

The paper itself was founded by good ole, long time liberal Al Neuharth.  And from its very beginnings USA Today would slant, or censor the news to fit its editor's personal liberal biases.  That wasn't too scary back then, because USA Today circulation wasn't that large, and was not taken seriously by either genuine journalists or the serious news hounds.  USAT was read by trailer trash over their Egg McMuffins in McDonalds...folks with IQs of 80..pretending to be intellectuals.

The problem came when USA Today's owner, the behemoth Gannett Corporation, began buying up America's hometown newspapers.  And they bought hundreds of them.  And they turned all of those newspapers into Pravda-like propaganda rags for the radical left.  Gannett, through its flagship USA Today began advocating early for open borders and blanket amnesties and more free government gravy for those hooked permanently for the government tit.  And in those Gannett owned, once independently oriented editorial rooms, Gannett pressured their journalists to slant the news to fit their editorial biases.  And in any number of those Gannett owned newspapers across America, Gannett will actually censor Hispanic crime news, lest their open borders editorial positions are threatened.

USA Today was once the equivalent of "bubble gum" music.  No one took it very seriously.  However, since they now own hundreds of our local newspapers, they have accrued immense power to shape public opinion.  You can blame USA Today for those cretins who violently protest conservative speaker son campus, who seek safe spaces, who believe college tuition and healthcare ought to be free to them.  No, not just a free "benefit"...but a free "right".

USA Today, and their daddy, Gannett, have managed to do what Walmart did to mom and pop groceries.  They have pretty much destroyed honest reporting and genuine journalism.

I'm saddened to see USAT's birthday come around.  I would much rather stand at the gravesite and see them buried....without honors.
Posted by A Modest Scribler at 2:00 AM