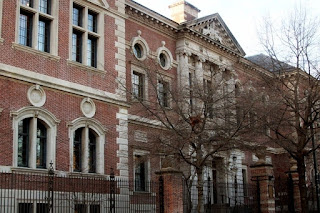 A majority of the student body, and half of the liberal faculty have their panties in a bunch over an editorial published in the Philadelphia Inquirer last week.  The editorial came from one of their own...one Professor Amy Wax.

Professor Wax's editorial, entitled "Paying The Price For Breakdown Of The Country's Bourgio's Culture" argues that many of today's societal problems can be attributed to the breakdown of societal's behavioral norms....that set of behavioral manners that allowed us to get along with each other in order to fix our problems.

Professor Wax first laundry lists what's wrong with America today, then breaks down how and when we surrendered to a form "villagism insanity" that thrives today. I'll let her do the talking:


Too few Americans are qualified for the jobs available. Male working-age labor-force participation is at Depression-era lows. Opioid abuse is widespread. Homicidal violence plagues inner cities. Almost half of all children are born out of wedlock, and even more are raised by single mothers. Many college students lack basic skills, and high school students rank below those from two dozen other countries.
The causes of these phenomena are multiple and complex, but implicated in these and other maladies is the breakdown of the country’s bourgeois culture.
That culture laid out the script we all were supposed to follow: Get married before you have children and strive to stay married for their sake. Get the education you need for gainful employment, work hard, and avoid idleness. Go the extra mile for your employer or client. Be a patriot, ready to serve the country. Be neighborly, civic-minded, and charitable. Avoid coarse language in public. Be respectful of authority. Eschew substance abuse and crime.
These basic cultural precepts reigned from the late 1940s to the mid-1960s. They could be followed by people of all backgrounds and abilities, especially when backed up by almost universal endorsement. Adherence was a major contributor to the productivity, educational gains, and social coherence of that period.
Did everyone abide by those precepts? Of course not. There are always rebels — and hypocrites, those who publicly endorse the norms but transgress them. But as the saying goes, hypocrisy is the homage vice pays to virtue. Even the deviants rarely disavowed or openly disparaged the prevailing expectations.
Was everything perfect during the period of bourgeois cultural hegemony? Of course not. There was racial discrimination, limited sex roles, and pockets of anti-Semitism. However, steady improvements for women and minorities were underway even when bourgeois norms reigned. Banishing discrimination and expanding opportunity does not require the demise of bourgeois culture. Quite the opposite: The loss of bourgeois habits seriously impeded the progress of disadvantaged groups. That trend also accelerated the destructive consequences of the growing welfare state, which, by taking over financial support of families, reduced the need for two parents. A strong pro-marriage norm might have blunted this effect. Instead, the number of single parents grew astronomically, producing children more prone to academic failure, addiction, idleness, crime, and poverty
This cultural script began to break down in the late 1960s. A combination of factors — prosperity, the Pill, the expansion of higher education, and the doubts surrounding the Vietnam War — encouraged an antiauthoritarian, adolescent, wish-fulfillment ideal — sex, drugs, and rock-and-roll — that was unworthy of, and unworkable for, a mature, prosperous adult society. This era saw the beginnings of an identity politics that inverted the color-blind aspirations of civil rights leaders like the Rev. Dr. Martin Luther King Jr. into an obsession with race, ethnicity, gender, and now sexual preference.
And those adults with influence over the culture, for a variety of reasons, abandoned their role as advocates for respectability, civility, and adult values. As a consequence, the counterculture made great headway, particularly among the chattering classes — academics, writers, artists, actors, and journalists — who relished liberation from conventional constraints and turned condemning America and reviewing its crimes into a class marker of virtue and sophistication.
All cultures are not equal. Or at least they are not equal in preparing people to be productive in an advanced economy. The culture of the Plains Indians was designed for nomadic hunters, but is not suited to a First World, 21st-century environment. Nor are the single-parent, antisocial habits, prevalent among some working-class whites; the anti-“acting white” rap culture of inner-city blacks; the anti-assimilation ideas gaining ground among some Hispanic immigrants. These cultural orientations are not only incompatible with what an advanced free-market economy and a viable democracy require, they are also destructive of a sense of solidarity and reciprocity among Americans. If the bourgeois cultural script — which the upper-middle class still largely observes but now hesitates to preach — cannot be widely reinstated, things are likely to get worse for us all.
Would the re-embrace of bourgeois norms by the ordinary Americans who have abandoned them significantly reduce society’s pathologies? There is every reason to believe so. Among those who currently follow the old precepts, regardless of their level of education or affluence, the homicide rate is tiny, opioid addiction is rare, and poverty rates are low. Those who live by the simple rules that most people used to accept may not end up rich or hold elite jobs, but their lives will go far better than they do now. All schools and neighborhoods would be much safer and more pleasant. More students from all walks of life would be educated for constructive employment and democratic participation.
But restoring the hegemony of the bourgeois culture will require the arbiters of culture — the academics, media, and Hollywood — to relinquish multicultural grievance polemics and the preening pretense of defending the downtrodden. Instead of bashing the bourgeois culture, they should return to the 1950s posture of celebrating it.
Amy Wax is the Robert Mundheim professor at the University of Pennsylvania Law School. awax@law.upenn.edu
Larry Alexander is the Warren distinguished professor at the University of San Diego School of Law. larrya@sandiego.edu

While I've been talking about much of this stuff for six years now, Professor Wax says it better....and with more judicial authority. If we only had a few more like her.

The problem is, there's WAY too much truth in what she says. There's an unnamed(group) that doesn't want to hear the truth. They rather hear the lies the Main Stream Media, Hollywood and Politicians feed them. It's way easier to accept fiction than non fiction, way easier to accept someone else's version rather than formulate one's own. They've quit thinking for themselves, so any version other than the one they prescribe to must be false because one of the big 3 didn't say it. My Mom used to call them "Spoiled Brats". I'd say she was right on.

Yes, Frank. She speaks the truth and, while scary, needs to be said. I wish I had written that essay.

Thank you for sharing this article Dearel. Wish I knew how to get those attributes back. I can teach my family,but society no longer reinforces what I teach. I can tell stories to little ones that teach these values, but they need to hear it from somewhere else also.

The crux of her article can be summed up in one sentence: As long as self-satisfaction was subservient to the good of society, things worked as intended. When divorce became easily obtained in the 1960's, the family began to dissolve. When illegitimacy became no longer taboo, children were left to the streets to rear themselves. When God began to be removed from schools and government, evil took hold. Ironically, those of us who continue to adhere to those "outdated virtues" live exponentially better lives in almost every respect than those that reject them. That's why they hate us.