"It Ain't Braggin If You're Good"


You guys might be surprised at how many prophetic things have been written in my blog.  Here's one I wrote four years ago:


We've got a freshman Democratic Congresswoman from Phoenix who just took her seat in Congress last January.  And Republicans had better watch out for her, cause she's going places.  I predict she'll serve her time in the House, then come back here and take John McCain's Senate seat when he comes up for re-election.  I don't think McCain's 30 percent popularity rate is going to get any better; he's played RINO long enough and the conservatives are tired of his prima donna act.

As a conservative I oppose Kyrsten Sinema in every position she's taken.  But I've watched her for years now and she is a very talented politician.  She started out as a state rep here in Arizona, representing a minority district so amenable to liberal politicians.  But I also saw her drive Republicans in the State House right up the wall with her probing questions on conservative legislation and she does it without the nastiness of a Pelosi or Wasserman Schwartz.   And I also saw her abilities to work with Republicans on their issues in order to get them to support her with some of her own priorities.

Sinema was just elected to Congress this past November and I watched each and every one of her campaign debates, and I was shocked to see a rare talent emerge.  She has the rare ability to turn her opponents anger back at them by responding with a focused and well thought out answer..and she dresses those responses with a charm and charisma you'll rarely see.  I've been following politics for 50 years and the only two pols I saw who had it were Reagan and John Kennedy.

You blog readers from outside Arizona, don't think for a minute you too won't hear about Kyrsten Sinema; she's already begun appearing on Meet The Press on Sunday mornings and she's being given some impressive committee seats in Congress as well.

Gripes my ass to have to worry about someone like Kyrsten Sinema but I do.  And mark my words fellow conservatives, she'll be throwing a little worry your way sometime in the future. 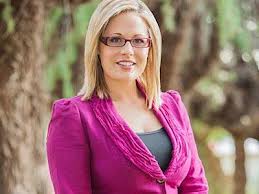 Then read this, from our Arizona Republic, last week:

Rep. Kyrsten Sinema says she is weighing a run for the U.S. Senate seat held by Jeff Flake, but there are ample signs she has already decided to do so.
Senate Minority Leader Chuck Schumer has had discussions with both Sinema, D-Ariz., and Phoenix Mayor Greg Stanton, who's widely viewed as another possible Democratic Senate candidate, about who will challenge Flake in 2018.
The powerful Democratic Senate Campaign Committee, meanwhile, has indicated it is supporting Sinema in the race, according to a source familiar with those discussions but who isn't authorized to speak officially about Democratic strategy. That decision would not typically be made unless Sinema intended to run.
In a statement Friday, Sinema, who is traveling outside the state, sidestepped giving a definitive answer.
"I’ve heard from many Arizonans encouraging me to run for the United States Senate. It is something I am seriously considering. When I make any decisions, Arizonans will be the first to know," said Sinema, a three-term congresswoman.
The statement is a departure from her usual message: that she is running for re-election.
Stanton has weighed running for Senate or for Sinema's U.S. House seat, if she runs for the Senate. He recently traveled to Washington, D.C., to meet with the DSCC, but declined to comment about his political plans.
Republicans also expect Sinema to enter the Senate race, releasing a statement Friday about their improved chances in her district.
"The (National Republican Congressional Campaign) not only believes this seat is in play, but is a prime pickup opportunity in 2018," said Matt Gorman, a spokesman for the organization.
Her entry in the Senate race would break a mounting political log jam for Arizona Democrats sizing up their prospects for 2018.
Steve Ferrara, a Republican radiologist who worked in the VA, is already running in Sinema's district and raised more than $200,000 in his first month in the race.

A Sinema Senate run would test the statewide appeal of her self-styled centrist, cooperative politics against Flake, who promises a brand of conservatism sometimes at odds with President Donald Trump and others in the Republican party.
Sinema has represented the state’s 9th Congressional District since the seat was created with the 2012 elections. She is a prolific fundraiser who obsessively casts herself as a problem-solver looking to get things done in Washington.
Arizona’s Senate race has drawn national attention, in part because it represents one of the few plausible seats Democrats could win from Republicans next year. Twenty-five of the 34 Senate seats on the ballot in 2018 are currently held by Democrats, limiting that party’s prospects for retaking control of the upper chamber.
Nevada’s Sen. Dean Heller is the only Republican facing re-election in a state that Hillary Clinton won last year. Flake, who is in his first term, is widely seen as the next-most vulnerable Republican senator.
READ:  The congresswoman who grew up in a gas station
Flake is already battling former state Sen. Kelli Ward for the GOP nomination next year.
Several polls have shown voters give Flake poor marks, and Trump has threatened to help finance a primary challenger, though it is unclear if he will follow through.
Still, only political novice Deedra Abboud has formally entered the race for the Democrats.
Randy Friese, a state representative from Tucson, has been considering a run for the U.S. Senate as well. Little-known Richard Sherzan of Mesa, a former Iowa legislator who made a short-lived 2016 Senate run that ended more than a year before the Democratic primary, also says he's running.
Sinema has made veterans' care a focus of her tenure in Congress and burnished her reputation for working across the aisle. At the same time, no one considers the VA hospital system in Phoenix free of the problems that have plagued it for years.

In some ways, Sinema and Flake are battling images as traitors to purists in their party that is at odds with their voting record under the Trump administration.
Both declined to support their party’s presidential nominee last year, and both have provided grist for critics of their parties.
Sinema, for example, has supported Trump's position 46 percent of the time in key votes this year, according to FiveThirtyEight. Her tough-on-crime positions have at times put her at odds with Democrats who characterize some GOP efforts as demonizing illegal immigrants.
But in the most important vote in the House so far this year, Sinema voted against the Republican-led health-care bill to repeal and replace the Affordable Care Act, along with every Democrat in the country.
Flake’s stylistic and ideological critique of Trump, and his support for immigration reform have earned him scorn within the right flank of his party.
But Flake voted for all three major versions of the GOP health-care plans that failed in the Senate and has voted to confirm every one of Trump’s nominees, including Supreme Court Justice Neil Gorsuch.
Sinema’s congressional website, like her wardrobe, is anchored in purple, a signal that she wants the public to see her as looking beyond the usual red or blue partisan playbook.


P.S.  I'm pretty sure one of our two RINO Republican senators is going to be looking for a job next year.

As a republican I've also been impressed by Rep. Sinema's rising star. At least she tries to work with others by compromise. Not being pleased by anyone else currently representing Az, I'd vote for her to be rid of the others.

I may have to also, Jeff. Our current Senators aren't doing anything.