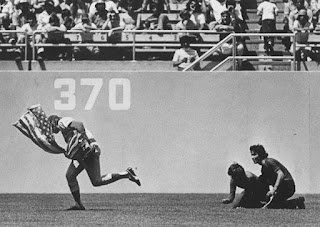 I wrote this blog essay five years ago.  In light of what's happening these days, I thought I'd remind you that we once had sports heroes who really were:

On the 25th of April in 1976, two guys jumped from the right field stands in Dodger Stadium, ran onto the field and began saturating an American flag in lighter fluid.  Rick Monday, playing Right Field for the Dodgers on that day, upon seeing them, ran toward them.  The wind blew out the first match they lit and, as they lit the second match Monday flew into them and snatched the flag out from under them.

He jogged over toward the dugout and handed the flag over to a team mate for protection, then jogged back to his position in right field.

That Dodger stadium crowd rose in unison and cheered Monday's flag rescue.  When Rick Monday came up to bat in the next inning he began to hear the faint beginnings of folks in the stand singing God Bless America.  Like waves building toward their crest, the singing became louder and louder as the entire stadium rose and celebrated the symbol of American greatness.

What those in the stands didn't know was that Rick Monday, before he garnered fame and fortune as a baseball player, was a United States Marine.

When interviewed later by the sports writers he was asked what prompted him to run over to rescue that flag.  Monday humbly answered that he only did what any other American would do.  Then he said "I've been to too many Veteran hospitals and seen the maiming and injuries of our vets as they fought to defend that flag and I just couldn't bear to see it burned."

Not only did Rick Monday rescue the flag, he had the moral support of his teammates & the crowd. From what I saw & heard about yesterday, if There had been a flag burning, most of the athletes would have provided the match.

Over paid athletes, unemployable outside of the sport, complaing about discrimination while playing in a league overwhelmingly black (NFL - 68%, NBA - 82%). You can't make this stuff up.

Totally logical in this era where down is up and up down.

Let me get it straight.

I tried everything from forex & stocks to internet marketing and affiliate programs.. I even made some money but then lost it all away when the stock market went south.

I think I finally found it. Grab It TODAY!!

There is SHOCKING news in the sports betting industry.

It has been said that any bettor needs to see this,

Watch this or quit placing bets on sports...

Get professional trading signals sent to your mobile phone daily.

Start following our signals NOW and make up to 270% per day.