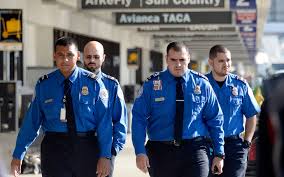 You've all probably read the news yesterday.  About TSA's 95% failure rates to detect hostile security threats.  The government reacted by firing the TSA Chief, which was probably the right thing to do.  But the problem with TSA is in it's founding.  Back in November 2001, just weeks after 9/11, Congress and Bush decided they needed to create a whole new government bureaucracy to deal with the terrorism threat.  So TSA was established.

And when I went to see what the requirements were for the job, I shuddered. Basically, they were, and are none.  So I'm not terribly surprised that we've had airport shootings and Americans have poked and probed, had their groin's groped, women have had their breasts fondled, little children have been profiled as security threats...and now we learn we haven't been a damn bit safer than before TSA was formed.

While in Hawaii, I moonlighted from my military job, working airport security at Honolulu Airport.  I worked for a firm called HPA. HPA had the private contract to provide security for airports throughout the islands.  HPA was very rigid about who they'd hire; we were all either retired Honolulu Police Department guys and military guys who had years of experience in providing for security for our nation's highest priority assets.  HPA employed closed circuit monitoring and our security folks were good at handling the public in a calm and friendly manner...and never let a threatening incident become disruptive or threatening to airline passengers.  In the six years I worked airport security we never had a major incident.

So, when I saw how they were pulling any old Tom and Dick and Mary off the street, and putting them into high tension jobs, when I saw they were hiring people off the street with little experience, I knew they were doomed to failure.  My estimate proved right.  TSA is now one of the most hated government bureaucracies and we are no better off than we were before 9/11.  That's the typical, long sad story about government bureaucracies.

Makes no sense to me. There's only just so many places one can hide contraband. Luggage/purse/carry on and body/clothing. Could it be more the method rather than the people? Xrays and metal detectors won't pick up a plastic knife taped to a shoulder. I also think that being "Politically Correct' and not profiling is silly. If 99.9999% of Terror Suspects are young Arabs males, then does it make sense to search an 89 year old lady from San Francisco? Hell no!

Once created, a government agency, a tax, a regulation (I'm stealing this from someone much smarter than me) is the closest thing to immortal a man can create... The TSA should be eliminated - anyone moving through an airport witnesses the utter incompetence of these folks (The Israelis know how to do it - and they have for 40 years). The Patriot Act should have been exterminated, especially given the repeated lies the NSA chiefs have told to Congressional committees. That said, all that has to happen is another towel head attack and Americans will rush to throw what's left of their liberty away at the alter of "security".... More than damn sad, it's scary, because government seeks the power to control every aspect of our lives. Giving it to them voluntarily removes any hint of resistance.

Private security would do it better for less.

You're right on, Randy. I like what Reagan had to say about government programs.

Brian, as I mentioned in my blog essay, when I worked for HPA I believe we did a better job. Private almost always better than government.