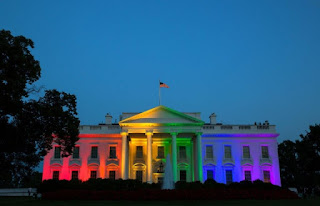 Regardless of how you feel about the Confederate flag, or national health care, or gay marriage, don't you find it just a little strange that the national discussion seems always to be about fringe issues, always driven by the minority fringe, while leaving our larger problems to ferment and fester? This bizarre national behavior is difficult to do the math on...even by Common Core standards.
Let's run the numbers. America is populated by some 350 million humans. Of that number two percent identify as gay. 12% are Black, less than one percent are of the Muslim faith, and 20% are Hispanic. Now let's crunch those numbers a bit further. Of the two percent who are gay, half have no interest in getting married...which corresponds with the percentage of heterosexuals who have no interest in marrying, or marrying again. So the entire gay marriage issue is being driven by fewer than 1% of the populace.
Now let's take a look at African Americans. 95% of African Americans share the same values as any other American; they serve in the Armed Forces, they get up each day and go to work, they obey our laws and honor our traditions. That leaves fewer than 2% who represent the violent urban thug, the radical white-hating element, the violent, loud-mouth creature who screams prejudice at the drop of a hat.
Now let's look at the Hispanics. A recent Forbes poll showed that 65% of Americans of Hispanic culture claimed employment as their greatest concern, with crime next on their list, and illegal immigration falling to 5th in their priority of concerns. So, it would seem the only Hispanics complaining about amnesty for illegals are the illegals themselves!
So, I ask. How did our government become totally consumed with gay marriage? Or amnesty for illegal invaders? Or the confederate flag?
Have we reached a an apex of national insanity? When fewer than five percent of the populace can drive our leadership to it's knees, when our entire national energy is devoted to "fringe elements" while the world erupts around us, and our economy slugs along at 2% of GDP growth...a rate only 1/3rd the average of the last 70 years...a growth rate that will not sustain job development, or even a standard of living that existed just ten years ago...how is it our politicians are devoting nearly all their time on "fringe" interest groups and totally ignoring the 95% of America who just want a decent standard of living and to feel safe in their communities?
And our President demonizes the 55% who identify as Christians and praises to the rooftops the 1% who are Muslim. Why does he fete Muslims for a Ramadan celebration at the White House, and preaches to Christians at the National Prayer Breakfast about Christianity's failings? Why does he light up the White House in rainbow colors when 98% identify as heterosexual? Isn't he supposed to be representing all of us? Why do politicians rush to ban the Confederate flag and say not one word about the destruction of some our most historic national monuments? Why do they give aid and comfort to people who burn down their own neighborhoods? Why do they not condemn the hate speech of militant Blacks who are calling for a holocaust of White Americans? Why do they impose laws on law abiding Americans and totally ignore the lawbreakers?
Perhaps one of you Common Core advocates can run the numbers and explain it all to me in a way I understand. Alas, when I run the numbers I see only madness....and surely a 2nd Civil War cause the vast majority of us are not going to put up with this forever.
Posted by A Modest Scribler at 2:00 AM

Got two words for you. "News Media". The media needs controversy or they are no longer relevant. If all there was to report was "good things", no one would watch or listen. If no one would watch or listen, then there would be no need for the news on TV or even newspapers. It's all about survival, and ultimately...MONEY. They also need Republicans and Democrats to disagree. That's why they have favored one party of the other. That way they keep control of controversies. It's also why Donald Trump, Carly Fiorina, Ben Carson and for that matter Ross Perot and Ron Paul would NEVER become President. They do not control these people. Even if it would be the best thing for America, ain't happening.

It's a distraction. The Prez is desperate to keep the truth from the people, because in 2016, we're picking another WH occupant. if the Dims have to run on a record of economic failure (because $ is what matters to most people), it will be harder to claim Hillary is the right person. Historically, 2-term Presidents result in a new party next President (George Bush I was the exception, Reagan had two terms then we had Bush I). Primarily, it's simply the timing of things: The left understands they have the opportunity to push things like deviancy, amnesty, and universal health care, so they do. I do agree that the right won't acquiesce indefinitely: When the leftists start to attack the churches' tax exempt status under the guise of intolerant hate speech, that will be the tipping point. All those guns Obama is responsible for selling will not stay locked in the safe, because the left will understand the fight is on, too.

I thought we were nearly 80% Christian, but that's not the point here. I love your column today and if it was posted on every message board and editorial page everywhere for a couple years maybe we might get a decent answer to this very important question you ask that has continuously badgered me for a very long time now. Just how is it that the form of love making most pushed in our once very classy country now involves anal penetration between two men with no possibility of procreation and the expansion of our once great society. All we will produce now is just more shit. This will include all the other subjects you pose the question to.
As Frank said, the news corporations who control the word will continue to do so as long as they keep the controversy alive or "we fall like a rotten fruit into the lap of our sworn enemy". As I listen to the social experiment speak, it sounds as though he is trying to instigate the civil war. I guess since he controls the most powerful military in the world he can reasonably assume he also controls the outcome. He's probably right by the look of where loyalty seems to lie in this spineless country.

I just can't get past the picture of the love story of the new millennium being consummated with one man pushing himself into another man's anus. There is not one thing beautiful in that picture, only a very disgusting visual of human waste clinging to, well....and the acrid odor permeating the room..."love is never having to say your sorry", nope, love is not puking on your partners back when you see what you have produced, YUCK!!! Thanks, for the new world order libs....

My apologies in advance for my disgusting rant here, this sure has become a pathetic picture of a once great land...

I'll pass on that visual, thanks Ken.

Glad to see today's blog is getting a lot of discussion.

Damn it I hate it when I do this, but I think I went a wee bit to far with my filthy comments today. I apologize if anyone was offended by them, I truly am and Mr. Scribler, I hope you will accept my most humble apology for the ugly picture I painted on your blog page, my mouth does get me in trouble from time to time. If you feel you need to eliminate my comments today I certainly would understand that. Again, I'm sorry....

We're all grownups here. I don't think there's too much that Scribe's Troops can't handle. If your passionate about something, say it. We have the right(not sure for how much longer) not to read if it offends us. My visual comment should have ended with a :)

This is one of the best you have ever written. I wish it would be published in every US newspaper. It will take a lot to get the couch potatoes riled up enough to fight back, but I see it coming. Elections go back and forth. Now our two choices of a party are basically the same thing. Eventually everyone will tire of PC and a new idea will emerge.

Thanks, Jeff, although this blog may not last much longer. After the FCC put the internet under their control they stated their first line of business was to curtail "hate speech" i.e....anyone who doesn't get with the liberal agenda. I'm sure they are monitoring me closely.

Excellent read today! It is amazing how attention is always diverted to more miniscule matters. Maybe, just maybe, some day we will get an administration in the White House that will concentrate on and tend to 'real' matters that affect our every day lives in this country such as jobs, economy, our immense debt. Apparently that is too much to ask!
And Ken, no need to apologize for being passionate about the subject!! I'll stick to the customary woman-man relationship myself!!

Well, dang it, I'm sure proud of my little army of readers today!