Barry Just Sent You The Bill...Again 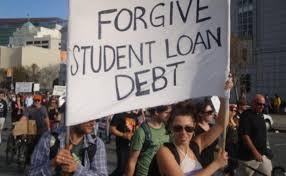 Barack Hussein Obama is very good and granting amnesty.  Both he and Hillary want to legalize 30 million illegal Mexican invaders (he's already given 5 million by decree).  And Barry and Holder said there's just too damn many Black prison lifers so they released tens of thousands of those last year.   Now Emperor Obama has amnestied student loan debt for 4.5 million liberal dunces who were shocked when their gender studies and philosophy degrees didn't win them a job.

So, yes, Barry's getting ready to send the taxpayer still another bill.  With big government it's alway "round up the usual suspects".  No one pays the price for billions of student loan debt and Hillary and Barry and Elizabeth Warren want taxpayers to ante up and pay off the entire trillion dollars in outstanding student loan debt.

Keep in mind that it was Barry who took the student loan program from the banks...and my, aren't they doing a wonderful job in managing it!

But let's delve into the current loan forgiveness issue.  The Department of Education, who is responsible for both the student loan program AND accrediting educational institutions to be eligible for student loan programs.  Guess what?  They's done a lousy job doing either...and we are once again going to be ask to pay for their mistakes.

The big culprit of late has been one of those commercial "for profit" colleges called Corinthian College.  Corinthian would enroll those gender studies majors and art appreciation studies, and rake in big fat tuition fees.  And they claimed that there job placement rates were astronomic.  Unfortunately, none of that was true and the Department of Education didn't blink an eye for seven years as Corinthian harvested the loot from total idiots.

And let's not leave out the students themselves for a little culpability.  Barry is forgiving student loan debts in amounts from $20,000 to $150,000!  This entitlement generation rented nice apartments, bought automobiles and iPads and iPhones and enjoyed pizzas and beer five days a week...hey, it's free money right?  Having to pay it back is way in the future so..what the hey!  (And Barry even promised them if they'd vote for him he just might decree the whole damn trillion in student debt null and void!

So, as we see, there are three devils here; Barry and company, Corinthian College and the students themselves!  So who's being punished?  Have the executives at Corinthian College going to prison for falsifying job placement rates?  Are those Gender Studies weenies going to be asked to pay up?  Is Barry going to redirect his royalties from his fictional biographies to pay for this debt?

Nope....it's you suckers!  Barry's sending you the big fat tab!

You're right,Carol. I get mighty weary. Need a conservative victory badly.