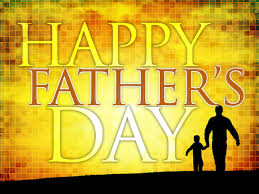 Father's Day always generates such a maelstrom of emotions for me.  Because I never really had a father at home, I chose my Uncle Floyd and Uncle Bill and Uncle Paul as surrogate fathers.  They had no choice; they didn't pick me...I picked them.

And they all served well in that surrogate role.  My Uncle Floyd was one of the most honest men I have ever known.  You always knew how you stood with him; if he liked you, you knew it, if he didn't, well you knew that too.   I was particularly proud that he loved me.  That love was better than any fruit salad I carried on my military tunic.   To earn his love and admiration was one of my finest achievements.   He was hard-working and tough and yet generous with his heart.  He's been gone now for many years...yet I love and remember him nearly every day of my life.

None of my Uncles were alike.   They were the joy of "fruit salad"...marshmallows and cherries and bananas, all different, but oh so sweet to the tongue.  My Uncle Paul was a little younger than Floyd and Bill..younger in spirit as well.  From him I learned the spirit of adventure.  He was a long haul trucker, and on those rare occasions when he was making a run in-state, he would pull his truck in down the street from my house, and walk down to our house, hug my mom, razz the kids, then sweep me up and haul me off to Richmond, or Sacramento, thus satisfying the wanderlust of a teenage kid that longed to roam.  Our last ride together was while I was home on leave from the military.  As we rolled down the road I was delighted that Uncle Paul paid me the respect of recognizing my new found maturity.  We were now equals, fellow travelers on the road of life, our days adorned with joyous recountings of family lore and proclamations of our love for every talent or quirk of those we were proud to call "family".   Blessedly, Uncle Paul is still with us, not at all well, but still rich in spirit and a love for life.

If my Uncle Bill was of the animal species he would have been a Panda Bear.  He was gentle and loving and lived to laugh.  And he wore his heart on his sleeve.  A father of all girls, he never had a son, and when I picked him, he willingly took up the challenge of steering a young boy in the right direction....not so much in words...he wouldn't know how to lecture or preach...but in how he treated others.  He could sometimes be gruff when his girls did something crazy, but he was so gentle that his girls knew how to wrap him around their fingers and it would be left to mom to lay down the law.  I guess I learned from my Uncle Bill how to love women; he loved his wife and his sisters and his momma with a gentility that is rarely seen.  I was in Saudi Arabia when my mom called and told me that Uncle Bill had passed away.  I still remember that it took me a full minute to say anything to my mom on that long, sad and truncated telephone line that left me so stunned and empty.  After hanging up I sat down at my kitchen table and wrote a letter to my aunt, pouring out my grief, I guess, telling her everything that Bill had meant to me.  And even today, when I drive by somewhere and see an old man sitting out on his front porch basking in the glory of a morning, or when I see a fellow sitting by the lake shore, a fishing pole in his hands,  I think of my Uncle Bill.  Happy Father's Day  Uncle Billy.

These men were my blessings in the role of "son".  It is more complicated for me in the role of "father".  I've learned that the concept of "father" has evolved over the years...as it applies to me.  When you are a young father you feel invincible.  You are the "protector", the head of the family, the "provider".  You have little time for contemplation during those "growing up years"...a growing up for your children as well as yourself.   But after your children have gone off; to begin their own lives, to marry and have families of their own, you have more time to ponder about how well you did.  You sit around and contemplate about every failure, every mistake, and every time that you might have failed as a father.  And if you are wise, you use those moments of grading yourself, to evolve...to be a better man that your children might admire and learn from.

And, it seems each year of growing older, as your body breaks down just a bit, you become grateful for each offering of kindness and tenderness extended you by your children.  You delight in the phone call, the intimate sharing of what's happening in their lives, their own frustrations and delights in their own role as "parent".  And when you are together again, that first rich, delicious hug that quenches your thirst after the barrenness of time and distance that have kept you apart.  And I still long for the lost son; the fine, strong man who would have held me by the elbow in my old age, and helped me up a flight of stairs, or who might drive me up into the mountains, to sit by a cool mountain stream, so that I might equate that cool running current and contemplate the currents of my own life.  Instead, the lost son is frozen in memory,  forever 27 years old.  And the only comfort I can find in his passing is that he's up there, patiently waiting at a heavenly bus stop, waiting for me to debark and once again delight in his warm embrace.

So, Father's Day is like a two lens opticon.  Look through one end and you see "giants"...men who you owe a debt of gratitude..for steering you in the right direction, for offering you the gift of love.  Look through the other end and you're there in startling closeup; examining every success and failure and hoping like hell that the two balance out.  Happy Father's Day to every father who's trying his best to deserve the honor of being called "father".
Posted by A Modest Scribler at 2:00 AM

A belated Happy Fathers Day, Scribe. It was a great weekend full of Family and Friends I don;t see very ofter. I too, grew up with lot's of "Uncles" that were an influence on my life. All are gone now but will never be forgotten.

My father was a mean drunk who beat us relentlessly until I was 14 years old. Ironically, my Mom took us to church 3 times a week since I was little. Father's Day means little to me - the only example I had was how not to do it. So, I took my childhood and determined to be different than my father. I don't drink - never have. I don't hit my children, I don't tell them they're worthless and will never amount to anything. I try to be patient with them. I make lots of mistakes, always have and I pay for that in my heart. My father is 84 now, married to wife #2 since my Mother died 9 years ago. He's very different and doesn't talk about when we were young. I see him once a year because my wife insists on it. No tears will I shed when he dies and it is enough that I don't hate him. Fatherhood is vitally important - be a better father than what you had if you grew up like I did. Your children deserve it.

Hi Dearel, can you tell us a little about your dad. I am interested in the bad guys because I have been branded a bad guy. I was a kind and caring father all my life. I am almost done putting both daughters through college on my $100,000 nickels. But they hate me. Why? Because my wifes mother was an absolute bitch and she taught her daughters to hate on their husbands. So my wife hates on me and my daughters learned the behavior from her just like she learned it from her mother. Both girls got one spanking when they were about 5 and have been perfect ever since. Both girls made good grades and turned out wonderful if you ask anybody. But they hate me. The wife is dieing of cancer now. Do you believe in Karma?