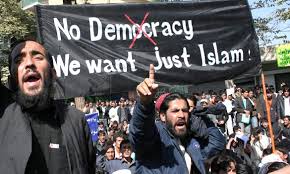 "Ignorance, Illiteracy and Immorality"
Over the weekend I was reading something about how Islam spread around the world, so that today nearly a quarter of the world practices the Islamic religion. I found it quite interesting how cultures as diverse as European, Asian and African embraced the religion. What I found was enlightening.
Islam requires three things to take hold in a society; ignorance, illiteracy and immorality. And it grows quite rapidly because the religion is forced by the tip of the sword...comply or die...there is no room for other beliefs.
Were it not for The Crusades we'd probably all be deferring from eating pork, praying five times a day, fasting for a month per year and planning our once in a lifetime trek to Mecca.
But today, Islam has never been more militant and aggressive. Fueled by the instability in the Middle East, and in Africa, Islam is on the march...and winning.
You say it can't happen here? Look back up to those three conditions that must exist for Islam to thrive.
In America today there are very few who can explain the three branches of our Republic. Nearly as many cannot tell you the name of our Vice President, and if he were not such a clown, even fewer could name him.
As to literacy, the U.S. Department of Education and the Council on Literacy did a study in April, 2013. They found that there are 32 million Americans who can't read...not a word. And nearly 75 million Americans can't read at the 5th grade level. 85% of all youth in the criminal court system are functionally illiterate as well as 70% of all prison inmates.
How we doing on morality? As recently as forty years ago 90% of Americans identified themselves as Christian. 75% attended church at least weekly. Today that attendance is below 50% and even fewer who actually believe in the existence of God.
And our entire national discussion is being driven by the 2% who are gay and the 1% who are Black urban thugs. The rest of America is busy on social media and watching television...and are far too stupid to converse intelligently on the real problems anyway.
So let's all keep posing those rainbows and championing gaydom. Let's march in the streets about two or three bad white cops and ignore the plague of Black urban crime. Let's keep hollering for more government benefits even as we watch Greece, the latest large socialist failure.
So the Muslims have pretty well won their war! 90% of you will be either watching TV, posting rainbows on Facebook, castigating White AND Black cops. And the ten percent of us who KNOW, the ten percent of us who are fearful of what's happening, the ten percent of us sounding the alarm, are just not enough to stave off our downfall. Hell, in light of what's happening maybe some of that ten percent will take a look at how things are going and just put out a welcome mat to ISIS!.....could it be any worse? Alas, if the Muslims gain control, there won't be any Glee or CSI's, or heavy metal music. And there won't be any gays to champion...their heads will be rolling down Market Street in San Francisco. And there won't be anymore of those God forsaken Christians that you hate so dearly....just a Koran and a jackboot mullah checking at your door to see if you all got out for the 4AM mosque call.
But we'll no longer have an alcohol problem. That's forbidden. And we won't be having a national discussion about legalizing pot. And the swimsuit manufacturers will be out of business, as will Victoria's Secret. And ladies, don't be worrying about dying your hair...your head will be covered, and you'll lose your driver's license, and your job, and you'll stay home, and you can't divorce...but if your husbands proclaims five times "I divorce you..I divorce you...I divorce you..." you're out on the street begging like the ladies who hung around the Safeway store I saw in Riyadh. And dog lovers; give em up...Muslims believe dogs are a tool of Satan.
Don't believe this? Go to any Muslim country and look. We have become "prime meat" baby! Allah Ahkbar!
Posted by A Modest Scribler at 2:00 AM

When we get rid of the Muslim in the White House, there actually is a chance of real "Change". Unless of course, we elect Hillary. Then it's a short trip to Hell from there. My Daughter takes her kids 40 miles(round trip) to a White area so her kids get a good education. My Grandson wants to be a Lawyer. My other Grandson is taken 20 miles(round trip) to school so he gets a good education. It's a shame they can't go to the school down the street anymore like we did. A real shame.

Education in America generally sucks, Frank. It'a the teachers unions and an unwillingness to get rid of the bad ones. And we keep throwing more money at it, without effect.

It's not the education system: It's the destruction of the family. When two parents are present, the homework gets done. The grades get noticed. The parent-teacher conferences are attended. When one person tries to do the work of two (and it IS work!), this stuff gets dropped. Over 73% of all black children are illegitimate. Almost 50% of all children in America are growing up in a single parent household (i.e. No father in the home). The schools need to be better, but society cannot - CANNOT - replace the two parent family (Mom and Dad - not the same-sex illusion of family so popular today).

Randy, you are of course right; the disintegration of the nuclear family is the source of many of our troubles. As you know, I've written of this endlessly. I'll put 80% of the blame on bad parenting but I'll not surrender to the idea that schools are doing well.