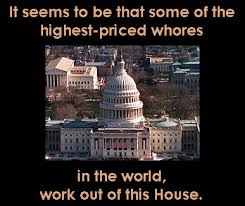 In 2003 the U.S. Congress was given the same intelligence brief on Iraq's Sadaam Hussein that George Bush was given.  Intelligence agencies believed that Sadaam possessed weapons of mass destruction.  Those reports were used to justify the invasion of Iraq.  Democrats and Republicans were all for the war, including John Kerry and Nancy Pelosi and Hillary Clinton.  Then, as the political winds began to change, as Americans wearied of war and combat losses and war spending, Hillary and Kerry and the Dems began to back away...even claim they were never for the war..and blamed the whole mess on Bush.  That's called "political whoring"...not having the fortitude and courage to stand by your political and moral decisions.

A decade ago Harry Reid was the most virulent anti-illegal immigration advocate one could find in the Congress.  He often stood up and railed against it on the Senate floor.  Ten years later old Harry was trumpeting amnesty in order to win Hispanic votes.  That's "political whoring."

Political whoring is simply adjusting your moral code according to which way the winds are blowing.  Alas, we are now governed by "pygmy people"....so small and weak in mind, so easily caving in to the latest social trend that we now seemed to be governed based on whatever's hot on Facebook and Twitter....there are no longer any moral imperatives.  My lord!  Whether you agreed with George W. Bush or not, at least the guy stuck to his guns!

Contrast that with some of our former leaders...before the leadership DNA pool got so watered down with the likes of the Clintons and Obama.

Where would our union be, and where would the Blacks be had Lincoln stopped playing "Russian Roulette" with a bunch of bad generals before he found the right one in Grant?

As much as I dislike Franklin Roosevelt's social programs, where would America have been had FDR not subtly and gradually prepared America for World War II?

How many are old enough, or have studied recent history enough, to remember when Ronald Reagan took office?  Carter had crippled our military, Iran was holding American hostages, Carter was strong-arming Israel and kissing Muslim ass, and the Russians were sounding the war drums.  Reagan promised he'd be dispatching American bombers to level Iran within 20 minutes of being inaugurated and Iran released our hostages in that first hour of Reagan's Presidency.  Reagan would later build back our military, threaten Russia with the Star Wars Anti Missile Program, win the cold war, and put in place policies that brought down the Berlin Wall, and the disintegration of the entire Soviet empire.

Closer to home, when Reagan took office home mortgage rates were 20 percent.  The U.S. Prime rate was 16 percent.  Inflation was raging at 15% a year, fueled by American labor unions who threatened strikes each year and won annual double digit wage gains.  Reagan hired Paul Volker to wage the war on inflation which rung out double digit inflation that had wiped out the buying power of retirees and left them eating dog food to survive.  By the time Reagan left office inflation was 4% a year.  More importantly, Reagan implemented business tax cuts that spawned the birth of Walmart, and Apple and Sun Microsystems and Microsoft and a thousand other businesses that would bring massive prosperity in the 90's.  Reagan achieved all this despite many Americans calling for his head in the second year of his Presidency.  But Reagan stuck to his guns and by the end of his first term Reagan had the support of Republicans and fully half of all Democrats.  His massive 49 state victory over Walter Mondale was solid proof that sticking to your guns....sticking to your moral beliefs is the right thing to do.

Do you see that kind of moral and political courage today?  Nope, all we have are "political whores" who'll bend with the social and political winds popular at the moment....no matter the cost to our country.

A final note:  In February 1861, as Southern Secessionism blossomed, Washington knew they'd need a great military leader to fight for the Union cause.  They sent for their best...a fella named Robert E. Lee.  Lee was stationed down in Texas when the dispatch came.  No specifics were given, but Lee, knowing the Southern war drums were sounding, speculated on Washington's intentions for him.  And, while he adamantly opposed dissolution of the Union, he vowed never to wage war against his native Virginia.  When Lee was called in and offered the leadership of the Union army he turned it down and submitted his resignation, giving up a chance for supreme power and fame.

Can you imagine the political whores of today making such a sacrifice?  Didn't think so.

Did you ever try to maximize your free satoshi collections with a BITCOIN FAUCET ROTATOR?