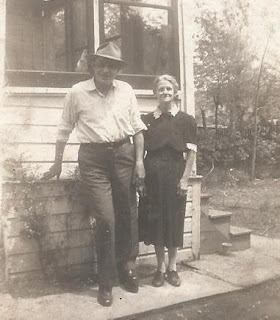 Carl was a Swedish immigrant who came to America around the turn of the last century.  First settling in Blair, Nebraska, Carl worked on a farm there, doing chores to pay for his keep.  He would eventually move to Omaha, Nebraska and begin clerking in a grocery store.  He was an industrious sort and soon became a farm commodities broker for the store, buying butter and milk and eggs and meat at wholesale, then retailing those commodities in the store.  Soon Carl's commodities brokering expanded into buying for several stores in the Omaha area.

Except, one fall day in the late forties, Carl really screwed up, going out and buying some 520,000 pounds of turkey meat at a bargain price.  Problem was, there was really no market for half a million pounds of that turkey meat around Omaha, Nebraska!

Carl could have faced bankruptcy...but he didn't.  Carl found a local aluminum producer who agreed to turn out several thousand little aluminum trays, then rounded up his friends and they joined he and his wife in his kitchen as he whipped up several thousand turkey dinners in his little three pocket aluminum trays, the largest pocket for the turkey and gravy, the smaller pockets holding a scoop of mixed vegetables and a dollop of mashed potatoes.

And those TV dinners became a hit with post war working wives.  They scooped up Carl's frozen dinners with great enthusiasm....and the Frozen TV dinner was born.  Carl would go on to expand the business, offering meat loaf and fried chicken and chicken pot pies.

Well, maybe that turkey scare gave Carl a heart attack....cause, in 1949 he up and died.  But Carl's son would continue with the business.  And soon those frozen TV dinners were selling well all over America.  And Carl's last name became a household name!  His full name?  Carl Swanson.

Note:  Swanson Foods was eventually sold to Campbell's Soup Company. You still see Carl's dinners in your local grocery store under the Hungry Man Label.
May you all have a wonderful Thanksgiving holiday.