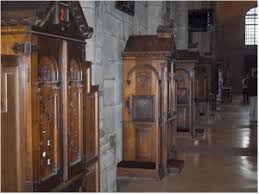 The Mayor of Hollywood just announced that he's working with several Catholic churches in the city, to borrow ten Confessional Cabinets. The confessionals will be placed at the corner of Hollywood and Vine, allowing Hollywood stars and producers to trek there and offer apologies for heterosexual and homosexual sex abuse.

The mayor said the confessionals are already booked through December and city schedulers are already working on January.

Note: The Hollywood community is currently on a city-wide "time-out", the denizens of Hollywood, Beverly Hills and Malibu all taking an oath of silence....even foregoing the savaging of our President as they wait for the next axe to fall. Movies and TV programs are being cancelled left and right, faster than a mile long line of dominoes.

America seems to be learning something too....that their kids have been exposed to a questionable set of morals for decades, fomented by the movies, TV and music emanating from La La Land.

Confessional manufacturers just started a second shift to deal with the increased demand.
Posted by A Modest Scribler at 2:00 AM

Something tells me this one ain't gonna be happening. Wish it were , but it will take a major sea change for any progress to made in this regard, unfotunately.

They are not sorry or regretful for what they do and have done. They're mad that they have been exposed. Hollywood is a moral gutter (borrowed that from future Senator Roy Moore).

Thanks for the comments today. Hope everyone understands that this was totally tongue in cheek. I expect no upward revisions of morality in La La Land.