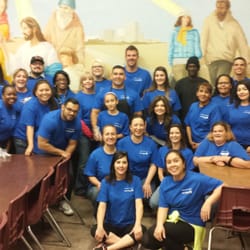 Just about every mid-size to large city has soup kitchens these days, providing a place for the homeless to get a meal.  Phoenix Rescue Mission has been feeding folks for decades.  In recent years, though, they've concocted some ingenious ways to get those homeless off the streets, and working to feed themselves.

The Rescue Mission's first venture into entrepreneurship began by recruiting, then training homeless folks to prepare and serve food.  They began a catering business a few years ago and now furnish lunch catering to numerous businesses around the Valley of the Sun.

Next came "Mission Cookies", a retail cookie business run almost entirely by folks who were once down and out, now employed in the art of cookie baking and distributing.  That too is doing well.

Now Phoenix Rescue mission has gone one step further, opening a restaurant, open to the public, whose proceeds will go to support all of their other operations.   Calling their new eating spot "Mission Possible", it may be the only restaurant in Phoenix established, not so much for the benefit of the eating public, as it is to those back in the kitchen preparing the food, and those out front serving it.

Mission Possible's "mission statement" is to provide unskilled folks, mostly on the public dole, the higher grade skills, not just to secure a minimum wage job, but the more highly paid chef and assistant chef and food management positions that pay far better.

In an era where sloth is much admired, and well compensated, I'm encouraged to see a far more positive approach to helping people get back on their feet.

You can indeed teach a man to fish....and never have to support him ever again.

There has to be a "want" to better oneself.But, the opportunity has to be made available. I believe most Homeless would jump at the chance. It can't be a very fun life. We have many Homeless people here in Santa Rosa, so many that it's hard NOT to come in contact with them anywhere you go. You very seldom see so much as a smile from them. I hate Government intervention but this may be one area I would support. Give those that want to get out and become productive Citizens(again?) a chance.

Absolutely, Frank. The homeless,at least those who want to work, have to have that hand up in order to begin living a good life.