"When They Threw Down Their Guns....and Picked Up Textbooks" 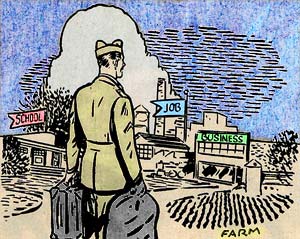 From his inauguration in 1933 Franklin Delano Roosevelt, that "godfather of socialism", tried everything to end The Great Depression.  In that first six months of his Presidency alone, he trotted out a good dozen federal programs....some to price freeze, some to create "make work", to bully business into submission, et all.  In the end, nothing worked.  America remained in depression for the next eight years and it would take a World War to pull us out of it.  However, toward the end of that war, when it was evident the allies were going to win it, Roosevelt signed on to two pieces of legislation that would propel America into a prosperity she had never known....nor perhaps will never know again.

The American Legion, remembering WWI, when millions of G.I.'s came home to joblessness and abject poverty, came up with an idea.  They sat down and wrote a charter for how to deal with an impending onslaught of millions of WWII G.I.'s who faced that same fate.

So, they suggested a program that might better reward the returning vets.  The first was a program that would pay $20 dollars a month to every jobless vet, payable for every unemployed month equal to the number of months served.

However, it was the second leg of that charter that would end up changing America and Americans...The G.I. Bill for Education....a program that would pay up to $500 dollars a year toward tuition and a $50 dollar monthly stipend, again equal to each month served.

To understand just how radical that idea was, one must understand that, up to that time, college was for rich people.  Only 5% attended college in those times.  Indeed a high school diploma was not only rare but a great sense of pride to those who owned one.

So, The American Legion pressed hard for that G.I. Bill of Rights.  And, on 22 June, 1944, the law was passed unanimously in both houses of Congress.

Congressmen thought they might lift up the fortunes of a few hundred thousand vets.  So it was a great surprise when more than 7.5 million G.I's took Congress up on their offer!  And between 1946 and 1950  half of all college students were grunts who had thrown down their guns and picked up textbooks!

Now there were other programs within that G.I. Bill of Rights, the most important being an education, the second most important being the G.I. Home Loan program.  Until the G.I. Home Loan program came along only 30% of Americans owned their own homes.  By the mid 50's, after those G.I.'s had gained an education, then swept into leadership roles in American industry, home ownership doubled within a decade.  And the first bonafide "American Middle Class" had their birth.

So, of course, those G.I.'s got married, started the baby boom, bought sofas and refrigerators and stoves and cars, and the American economy soared.  And, when the dust was settled, the federal costs of educating our vets proved to be minuscule as those program costs were returned to federal tax coffers by a ratio of ten to one!  For every tax dollar the feds spent on college and low interest home loans they got $10 bucks back in taxes!

Well, we pretty much know those kinds of federal programs can't succeed today....mainly because all success must inherently start from the bottom.  One does not build a house by starting with the roof!  That G.I. Bill of Rights succeeded because it was offered to those who had sacrificed, who were willing to work hard, and targeted to those who had "earned" those benefits.

Today we reward sloth.  And that sloth is killing us.

But we must never forget that time when the Feds accidentally created something that changed the world....when men threw down their guns...and picked up textbooks.

Maybe the Sloth of today should be required to pick up a gun to get that handout from the Gov't.

Worst thing they ever did was ending the draft, Frank. Folks learned a measure of discipline back then.

I agree with you Dearel about the draft and discipline... up until about 5 years ago when the Army came out with their new motto, "The Army of One". No longer is the service about working as a unit, but looking out for yourself and doing whatever it takes to get ahead. The goodness that came about because of the Draft, is gone forever.