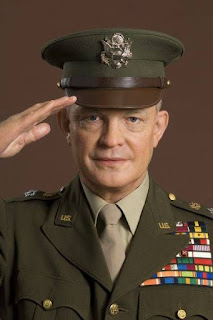 Ask any semi-literate American and they'll tell you our three greatest generals were Washington, Grant and Eisenhower.  However, having read thousands of hours in general history, and a dozen biographies of all three in that "Fruit Salad Set", I ask you to put on your cynic hat for a bit and allow me to play devil's advocate just a little.

Let's first look at Washington.  George Washington was something of a "British Lackey" for a good couple of decades before he was chosen to lead our revolution.  George was almost manic about wanting a regular commission in the British Army.  He never got it.  That didn't stop old George from "duding up" in the Virginia Militia.  George kept his British brokers busy sending him the finest of materials to fashion grand uniforms, even before he assumed American leadership.  The British failure to reward George in the French and Indian wars would cost them more than they realized.

Now let's look at Washington after he became our leader.  Was he a brilliant strategist?  Hardly.  After that first victory in Boston, George nearly lost the war on the fields of Manhattan a short time later.  Hobbling back to the wilds of New Jersey with what was left, the war was almost over before it began.
Oh, let us do give credit to Washington's perseverance, and his legendary bravery and he certainly stuck it out at Valley Forge.  But, if we study our history well we know that Washington's lieutenants in Georgia and the Carolinas inflicted far more pain to the British than George's troops.  And were it not for the French we might all be speaking cockney and eating steak and kidney pie.

So was George Washington one of our greatest generals?  Well, let's give him and "A" for effort and bravery and a "C" for strategy.

Now let's look at U.S. Grant.  Grant was an abject failure in the beginning of his military career.  Graduating far down in his class at West Point, Grant seemed to be good at only one thing; horsemanship and drinking.  It would be the drinking that would eventually drive Grant from the Army.  While Grant served in the Mexican War he was pretty much relegated to supply officer duties and did little to distinguish himself.  After the war Grant was sent out west and became so bored he nearly drank himself to death.

After leaving the Army Grant had all kinds of sky high aspirations.  Yet, he failed in business, failed in real estate and kept his family mired in poverty.  When the Civil War broke out Grant was a failing leather apprentice, working for his father.

So when war broke out it was almost a Godsend for Grant.  Securing a Colonel's commission, Grant helped to round up local recruits for the union, then was granted command of a unit...his bosses always reluctant to give him much to do, his penchant for drunkenness well known throughout the ranks.

Of course it was Vicksburg where Grant won redemption.  And it was Grant's perfect willingness to "churn flesh" that won him victories.  While Grant was not heartless, his lack of strategic brilliance forced him to employ concentration of strength to win victories...the Union seemingly always commanding overwhelming battlefield numbers supremacy.  Contrast Grant's "flesh churning" with other Union generals.  McDowell failed because he wouldn't fight, reluctant to endure "any loss".  And those generals who succeeded McDowell were equally reluctant to accept massive loss.  Grant had no such concern, as evidenced by his dispatching 7,000 Union boys to their death in 20 minutes at Cold Harbor.  Twenty years later even Grant would admit that being a mistake.

So read your Civil War history.  It's pretty clear that Robert E. Lee could "out general" Grant seven days  a week...Lee's only failure those disastrous charges at Gettysburg and the South's inability to feed and equip their Johnny Rebs.

So does Grant deserve being called one of our greatest generals, given the self-butchering of his own troops?  Could the Union have won that war with better strategy and less "sausage-factory" battle tactics?  While Grant was a good man, he had his share of military shortcomings and leaves a lot to ponder on superior leadership.  And, had it not been for Sherman, we might still be fighting that old war.

Let's look at Eisenhower.  How many of you realize that, when World War II broke out in Europe, Eisenhower was still a Lt. Colonel paper pusher in the U.S. Army?  At war's beginning Eisenhower had spent most of his career as a staff officer for higher-ups, including Chief of Staff for MacArthur in the Philippines.  Dwight D. kept getting shuffled between various Chief of Staff duties and manning a desk in war plans for nearly his entire career.  While serving in those posts, (Eisenhower never commanded a unit on the battlefront) Eisenhower sharpened his skills as a "diplomat"...smoothing the feathers of politicians and the general staff.  And that was fortuitous when America needed both a general and diplomat to cobble together cooperation between the allies battling Hitler and the Axis.

Did Eisenhower's leadership win that war?  Well, I'd give far greater credit to America's miraculous war production.  Could we have lost fewer men at Normandy if we had listened to Churchill and massed our forces and driven up the Italian boot?  How quickly might we have reached Berlin if Ike had given Patton more rope and given him more fighting room?  While those questions might never be answered satisfactorily, it is my belief that Ike made a massive mistake in not listening to Churchill when he advised not to let the Russians into Berlin.  Consider the forty years of Cold War that followed that ill-fated decision.  And, even after the war, it is my opinion that Ike failed again in accepting that Korean truce a few years later.  We are still dealing with problems from that decision.

So were Washington, Grant and Eisenhower great generals?  Well, while I am more than willing to acknowledge the greatness of each man, it is my belief that these three dudes were three of the luckiest bastards on the planet...the times and circumstances perfectly aligned to raise them to greatness.  All three men had fatal flaws...Washington's talent for losing on the battlefield, Grant's willingness to "churn flesh" and Eisenhower's near fatal bad decisions that led to decades of woe to follow.

As a retired grunt myself, if I had to choose any general to lead the fight, I believe I'd choose old crazy George Patton. He was a brilliant tactician and a poor politician but he'd be the guy I'd most enthusiastically follow if I wanted to win and win quickly.

Would love to hear the thoughts of my fellow readers.
Posted by A Modest Scribler at 2:00 AM

My first thought is History is told by the victors and I am glad we won! My second thought is none of us are exactly as we appear to be and war has a tendency to bring out the best and worst of us. And, having seen those Civil War Battle Fields, I am always amazed at the stupidity of war. So tragic that one man's Greatness is sometimes dependent on the death of Thousands. Yet, all three of these Military Men left the war behind, became Presidents, and, in peace, led us on to better things. Today's story lets us know these were just men, ordinary Humans with flaws, called upon to be greater than themselves.

Except for Eisenhower, I would agree with your comments, Jerry. Eisenhower should have kept the Russkies out of Berlin and Eastern Europe (and if they didn't listen tell then we've got a nice A Bomb with their name on it). And it was Eisenhower who appointed Earl Warren to the Supreme Court....the Chief Justice who did more damage to American society than anyone except for FDR.

Very well said, Jerry. We build people up to sort of Fairy Tale stature, and never do we see the flaws all humans have. If we break down every great man in History, we could probably find reason to hate/doubt each and every one of them. The trick is to succeed in spite of. John Kennedy was heavily flawed. But he knew how to tiptoe down the middle of the fence. I prefer to see these men for their greatness because speaking with a British or German accent would never have allowed this Country to evolve into it's own greatness. And "yes" Scribe. Luck has a lot to do with just about anything that is achieved. Ask the Golfer who watched his ball bounce into the creek while his opponent's ball hit the same spot and bounced to 16 feet of the pin.

Sometimes it better to be lucky than good. Good story Scribe.

Thanks, Brian. In Washington's case it was almost providential, as if our creator was guiding events. I truly believe that.