"Hands Down, A Hard Worker" 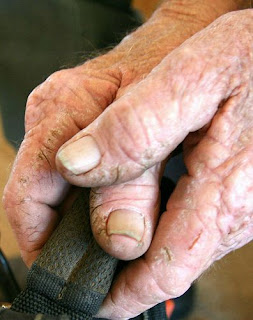 He sat at the only outside table at the Italian sub shop next to the post office. Defying the Sunday morning heat, he sat, smoking a Camel, his hands huge around that six ounce styrofoam coffee cup.
After I dropped my letter over in the weekend drop box I walked back toward my van. Offered another look at the old gent, wearing khakis and blue checked shirt, then said "aren't you hot sitting out here?"
"Nope", he said. "Grew up in West Texas where this would be called a 'cool spell".
"That so?" "What kept you busy over in West Texas?"
"Wildcatting on oil rigs." (I wasn't going to get much out of this guy).
I looked down at his hands. They were huge...scarred, battered....as big as a kid's catcher's mitt.
"Been in Arizona long?"...the familiar greeting in a state that's taken in a couple of million transplants over the decades.
"Nope", he offered.
"Enjoying your retirement now?"
"Not quite", he said...as if every word cost him a dime.
"What kind of work you do?"
"Fix refrigerators", he answered.
I looked down again at those hands. And I believed him, the scars and cuts clear evidence of when the tin snips and cutters slipped.
I wished him well, climbed back in my van, grabbed one more look at him through my windshield. As I pulled out of the parking slot he lit up another Camel and raised that styrofoam cup to his lips....the white of styrofoam nearly lost in those big hands.
Posted by A Modest Scribler at 2:00 AM

that's funny, those could be My hands! The only time they get Really Clean is when I pour and work with cement! I had an uncle who at 78 he and two other old geezers did all the concrete work in building a 10,000 square foot church. He died while on vacation at 99 years old!

Folks like your uncle are a dying breed, Jerry. The same might be said of you...folks who fashion beauty with their bare hands. Over on my FB page I often profile just every day people who I've met of late. This just happened to be one of many "mini-stories" that I pen over there.

Great story! I could totally visualize it. Reminded me of my grandfather, who died far too early in life. Hard worker. I miss him to this day and it's been 36 years.

Thanks, Carol. So glad you enjoyed it. A story of not much consequence...just a brief human to human connection the other day.