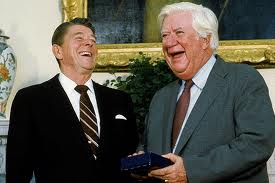 Speaker of the House Tip O'Neil was the most liberal Democrat in Congress during the 1980's.  President Ronald Reagan, even today, was the model of Conservatism.  Yet, by working together, these two leaders were able to create 30 million jobs, stamp out 20 percent annual inflation rates, reform Social Security to extend it's life for over 50 years and revive the spirit of an America decimated by the Presidency of an effete and arrogant Jimmy Carter.

Today, Americans are once again more divided than we have ever been.  Congress is frozen by inaction.  While the House has sent three budgets to the U.S. Senate, the Senate has allowed them to die in the graveyard of cowardly politics.  The Democratic controlled Senate has failed to pass a budget bill for three years now and President Obama's budget proposals were so lacking in substance that his own Senate voted it down 97-3 against.

So how were Reagan and O'Neil able to forge agreements that set the stage for the greatest economic recovery in the 20th century?  And why has President Obama failed to achieve that same success?  Let's take a look.

When one sifts through, and discards all the political rhetoric, and simply examines the facts, we can easily see how Obama failed while Reagan succeeded, even with a Democratic majority in Congress.

Let's go back to that first month of Obama's presidency.  (One need not twist facts to fit one's own political views; let's just examine the facts).  When Obama gained office the first thing he did was to cede legislative and political leadership to Nancy Pelosi and Harry Reid.  Unlike Reagan, who had leaders of both parties up to the White House for coffee or dinner, Obama sat on his throne, crowed that "elections have consequences", basked in his own political victory, and told Republicans "eat shit".

So, Nancy and Harry came up with a massive pork-laden stimulus bill, a bill that funded a $15 million dollar rat preserve in Pelosi's district, a water park in Obama's Chicago, a $6 billion dollar train program for Harry, one that starts in the middle of the Mojave Desert and runs to Vegas, and $90 billion dollars to Obama's Solar Industry campaign contributors, most of which are now bankrupt.  When Republicans protested the obscene pork Obama said "eat shit".

So, unlike Reagan, Obama doesn't bother to invite either party to the White House much.  That's just smacks to much of the egalitarian, and far below the tolerance of Emperor Obama.   While Reagan and Tip O'Neil battled over legislation during the day, that didn't stop them from having a glass or two of scotch in the early evening, and treating each other with friendship and respect.  While Obama loves himself so dearly there's little room for anyone else in his heart, there was once a time when partisans could get along.

Mitt Romney is no Ronald Reagan.  But he worked with a Massachusetts statehouse that was 87% Democrat and somehow was able to balance the budget and make the state's schools the best in the nation.  Mitt won't be sharing a scotch with Congress but he'll work with them...and perhaps best of all, he won't be telling Congress, and the American people to "eat shit".