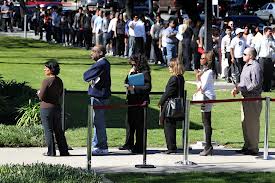 Commander in Chief Barack Hussein Obama just ordered his troops to "fall in" and "line up".  The unemployment rate just edged back up to 7.9 percent, according to the jobs report this morning.  This will be the last jobs report before the election so we can now offer a jobs summary for Obama's entire term as President.

Overall, after that $787 billion dollar stimulus bill, after Cash For Clunkers, after all of those "mortgage reduction programs, the total job growth from the day Obama took office, to today, is -61,000 jobs.  We  taxpayers let the Obama/Reid/Pelosi regime spend over $6 trillion dollars, over $2 trillion just on liberal stimulus programs, and we now have 61,000 fewer jobs than when Obama took office.

How did Obama fare with minority employment?  The unemployment rate for Hispanics is 14% and the jobless rate for Blacks is 20%.   In raw numbers over 23 million Americans remain unemployed or underemployed.  Even those who have jobs, many are finding that they're getting only 30 hours per week.

So Obama's Food Stamp and Unemployment army just got a bit bigger.  Obama promised that if we let him spend a trillion dollars on stimulus he'd get the unemployment rate below 5 percent by the end of his term.  Hell!  He even said that if he didn't achieve that rate he would be a one-term President.

With each succeeding year of the Obama Presidency the Gross Domestic Product has declined.  We are now languishing in a four year depression with economic growth stunted at less than 2% annually.

During the last great recession Ronald Reagan championed small business and forced the government to get out of the way and let business lead us into recovery.  Reagan was churning out 500,000 new jobs per month which led to 30 million new jobs created during his two terms.

The Bureau of Labor statistics said we need over 300,000 new jobs per month just to keep up with new Americans entering the work force.  This year Obama has managed to demonize business and throw so many new regulations at them that we are averaging less than 150,000 jobs created per month, not even half of the jobs needed to keep us at 8% percent unemployment.

So, "fall in" America!  Get in that unemployment line and wait your turn.  Get ready to join Obama's 47 million strong Food Stamp Army.  The only thing that might save you America is to get in line next Tuesday and vote to send this Food Stamp General back to Chicago.
Posted by A Modest Scribler at 5:57 AM

I just finished reading an article saying in obama's "Recovery", two thirds of the jobs have gone to the "foreign born", one third to illegals. This is the most un American administration I have ever lived under. I pray Tuesday finds all of them looking for a job including the majority of democrat senators. Several of whom are proud to say they are fully running against obama in order to succeed. I hope they don't, I know my personal economy won't survive another year of this. This is really goddamned depressing. Every time I hear that son of a bitch speak I cringe.

If Obama gets re-elected we may never recover.